School 4 Lovers is an international touring Hip H'Opera (distinguishable from a traditional hip hopera) created in the framework of RESEO’s (the European Network of Opera Education Departments) Creative Ways to Mozart Project.[1] Throughout 2006, Mozart’s 250th birthday was honored and celebrated around the globe.[2] Across Europe, the beloved classical composer's anniversary was commemorated with projects in opera houses, concert halls, schools, community and youth centres, and libraries.[1] School 4 Lovers, a modern adaptation of Mozart's Cosi fan tutte was a collaboration between four opera houses in Germany, Estonia, Finland and the UK.[1]

School 4 Lovers, the largest touring hip hopera, transposes the action from the original 18th-century Naples to a 21st century inner-city London public housing estate. The Hip h'opera proved highly controversial to the regular patrons of Opera who detested the operatic work of Mozart being tainted by Hip hop.

To mark the extraordinary milestone of 250 years, German musical theater director, Dr. Markus Kosuch developed the idea and the concept of the cross-culture contemporary musical theater project which merges hip hop and opera together.[3] Kosuch approached Katie Tearle and Ulla Laurio, Heads of Education at Glyndebourne and Finnish National Opera to make new partnerships and a cultural and artistic collaboration.[1] The Creative Ways to Mozart Project (CWM), a collaboration between opera houses and youth culture organisations to engage young people creatively with Mozart and his operas was lead by The Réseau Européen des service educatifs des Maisons D’Opéra (Reseo) or the European Network of Education Departments in Opera Houses. Kosuch proposed that the plot focus on Cosi's love and fidelity conflict set in the inner city of London, rather than the traditional river docks of Naples.

Working with artists, teachers and young people from across the continent, the partner organisations exchanged, compared, brainstormed, documented and, above all, produce ways to bring Mozart alive for young people 250 years after his birth.

BBC World arts correspondent, Vincent Dowd said of the School 4 Lover's premier "Sometimes there can be an aura of PC worthiness to projects like these. When people try to combine high art and street culture sometimes it's more like a collision. But this time it's gelled."[4] 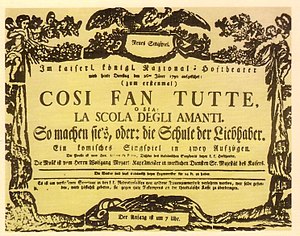 Playbill of the first performance