"Second Sons" is the eighth episode of the third season of HBO's fantasy television series Game of Thrones, and the 28th episode of the series. The episode was written by executive producers David Benioff and D. B. Weiss, and directed by Michelle MacLaren. It aired on May 19, 2013 (2013-05-19).

The episode is centered on the wedding of Tyrion Lannister and Sansa Stark in King's Landing, Gendry's arrival at Dragonstone and Daenerys's meeting with the mercenary company of the Second Sons before the walls of Yunkai.

Arya tries to kill the Hound while he is sleeping, but he is revealed to be awake, and thwarts her attempt on his life. They depart their camp and head for the Twins, where the Hound intends to ransom Arya to Robb.

Tyrion visits Sansa to ease her apprehension at the prospect of being his wife. In the Sept of Baelor, Cersei threatens Margaery with the story of House Reyne, former Lannister vassals whom Tywin exterminated when they rebelled against him. After arriving at the Sept, Sansa is walked down the aisle by Joffrey.

At their wedding feast, Tyrion gets drunk. Joffrey, after threatening to rape Sansa, calls for Sansa to be stripped for the traditional bedding ceremony, but his plan is thwarted when Tyrion threatens to castrate an outraged Joffrey. Tywin defuses the situation. Tyrion leaves the feast with Sansa, and he tells Sansa he will not share her bed until she wants him to.

Melisandre returns to Dragonstone with Gendry and takes him to see Stannis, who recognizes Gendry as one of Robert's bastards. When Gendry is taken to his chamber, Stannis and Melisandre discuss what they intend to do with him.

In the dungeons, Davos continues to learn to read. Stannis visits him to discuss Melisandre's plan to sacrifice Gendry. Davos objects to the plan, but Stannis remains resolved. He then makes Davos swear to never raise his hand to Melisandre again, and frees him.

Melisandre visits Gendry and seduces him, tying him to a bed in the process. She lays three leeches on him to draw his royal blood. Stannis ritually burns the leeches, speaking the names of the usurpers to his throne: Robb Stark, Balon Greyjoy, and Joffrey Baratheon.

Jorah tells Daenerys that Yunkai has employed a mercenary group called the Second Sons. Daenerys meets with Mero, his co-captain Prendahl na Ghezn, and his lieutenant Daario Naharis. She attempts to bribe Mero to fight for her, and gives him two days to make a decision. Back at camp, Mero decides to kill Daenerys; Daario is randomly selected to commit the assassination.

After nightfall, Daario enters Daenerys' camp, disguised as an Unsullied. He enters her tent and revealed he killed Mero and Prendahl instead, admitting that he is smitten by Daenerys. She demands his loyalty and he accepts.

Sam and Gilly stop at an abandoned hut for the night while travelling to the Wall. When they hear a murder of crows cawing nearby, Sam leaves the hut to investigate. He is attacked by a White Walker intent on taking Gilly's son, but Sam stabs it with his dragonglass dagger, causing the Walker to disintegrate. 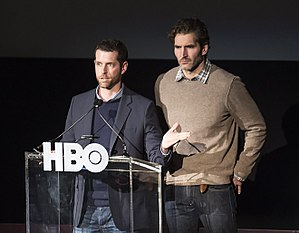 The episode was written by series co-creators David Benioff and D. B. Weiss.

"Second Sons" was written by the show creators and executive producers David Benioff and D. B. Weiss, based on material from George R. R. Martin's novel A Storm of Swords. The episode adapts parts of the book's chapters 19, 29, 37, 43, 47 and 48 (Samwell I, Sansa III, Davos IV, Daenerys IV, Samwell III and Arya IX).[1]

The episode introduced the mercenary captains in service of Yunkai: Mark Killeen was cast as Mero (known as the Titan's Bastard), Ed Skrein the recurring role of Daario Naharis, and Ramon Tikaram the part of Prendahl na Ghezn. Tikaram is mistakenly credited as "Ramon Tikrum" in the closing credits.

Most of the scenes of the episode were shot in the Belfast studios of The Paint Hall, including the wedding of Tyrion and Sansa that was filmed at the huge semicircular set of the Great Sept of Baelor in mid September 2012. For this scene, a few hundred extras were recruited.[2]

The episode received 5.1 million viewers, an increase from the previous week, with an 18-49 demographic of 2.6.[3] In the United Kingdom, the episode was seen by 0.907 million viewers on Sky Atlantic, being the channel's highest-rated broadcast that week.[4]

"Second Sons" received critical acclaim. Review aggregator Rotten Tomatoes surveyed 20 reviews of the episode and judged 100% of them to be positive with an average score of 8 out of 10. The website's critical consensus reads, " 'Second Sons' shines through efficient storytelling -- and a comparatively low number of storylines to keep track of this week."[5] Writing for IGN, Matt Fowler rated the episode a 9.0/10, and wrote "This week's well-crafted and wonderfully acted Game of Thrones gave us a cold wedding, a hot bath and a blood-letting." He especially praised the scenes between Sansa and Tyrion and between Ser Davos and Stannis.[6] David Sims and Emily VanDerWerff, both writing for The A.V. Club, gave the episode "B" ratings. Sims was frustrated by the episode's meandering pace, but praised the end of the episode, with Sam killing the white walker, as "the most crucial, fascinating, electric moment of the night".[7] VanDerWerff praised the use of nudity in the episode, writing "...I actually think Game Of Thrones has gotten quite a bit better at utilizing nudity and sex in the midst of everything else as a method of telling its story. It’s come a long way from the 'sexposition' days of season one, when it sometimes seemed like the series would toss some breasts into the background of a scene just in case we got bored of hearing somebody talk at length."[8]

At the 65th Primetime Creative Arts Emmy Awards, the episode was nominated for Outstanding Hairstyling for a Single-Camera Series.[9]

Retrieved from "https://en.everybodywiki.com/index.php?title=Second_Sons&oldid=1151074"
Categories:
Hidden categories:
This page was last edited on 1 December 2020, at 14:14.
This page has been accessed 26 times.
Content is available under License CC BY-SA 3.0 unless otherwise noted.
Privacy policy
About EverybodyWiki Bios & Wiki
Disclaimers
Mobile view