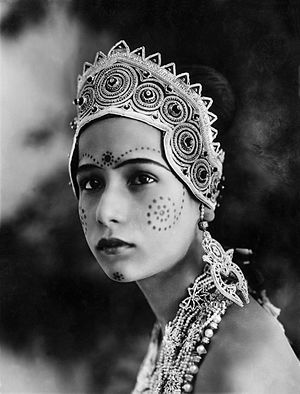 Seeta Devi as Gopa in secene from film, Prem Sanyas (The Light of Asia) 1925

Himanshu Rai cast Smith, an Anglo-Indian, in Prem Sanyas, the movie which is better known by its English title: The Light of Asia. This was her debut film as Seeta Devi, and it made her a star immediately. Later she acted under the banner of Madan Theatres as well.

Three of her most successful films were: The Light of Asia, Shiraz, and Prapancha Pash. All three of these films were made through the collaboration of German film director Franz Osten and Indian actor-producer Himanshu Rai along with Bavarian company Emelka.[2] This unique trilogy were connected to three different religions and based on three different stories of Indian history/mythology: The Light of Asia was based on the life of Buddha, Shiraz was based on construction of the Taj Mahal and Prapancha Pash, better known by its English title A Throw of Dice, was based on a story from the Mahabharata. Seeta Devi was the leading actress in all these three films, though the role in Shiraz was that of 'the other woman'.

Three of her other successful films, Durgesh Nandini, Kapal Kundala and Krishnakanter Will were based on popular novels of Bankim Chandra Chatterjee.

Many believed that Renee Smith and her sister Percy Smith alternatively appeared as 'Seeta Devi'.[1][3]