Khan was born in a Pathan family in the Village Nausha in Chharra Rafatpur[verification needed], in the Aligarh District. He has a B.A. from Aligarh Muslim University (AMU), where he did stage performances in the AMU Drama Club. 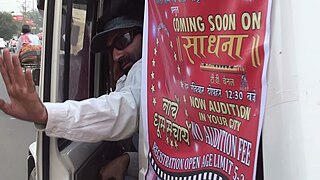 He moved to Delhi, where he started with the television industry as an assistant director on the sets of several series including:

Over the years he had worked with producers such as Ashok Buddhiraja senior producer DD National and directors Gurbir Singh Grewal and Mehmood Nazir. After that, he worked for Jhankar Tv as a senior producer from 2005 to 2006.

Retrieved from "https://en.everybodywiki.com/index.php?title=Shad_Khan_(anchor)&oldid=959385"
Categories:
Hidden categories:
This page was last edited on 16 August 2020, at 20:26.
This page has been accessed 270 times.
Content is available under License CC BY-SA 3.0 unless otherwise noted.
Privacy policy
About EverybodyWiki Bios & Wiki
Disclaimers
Mobile view