A graphical interface from the late 1980s, which features a TUI window for a man page. Another text window for a Unix shell is partially visible.

CLI shells require the user to be familiar with commands and their calling syntax, and to understand concepts about the shell-specific scripting language (for example bash script). They are also more easily operated via refreshable braille display, and provide certain advantages to screen readers.

Graphical shells place a low burden on beginning computer users, and are characterized as being easy to use. Since they also come with certain disadvantages, most GUI-enabled operating systems also provide CLI shells.

In addition to shells running on local systems, there are different ways to make remote systems available to local users; such approaches are usually referred to as remote access or remote administration. Initially available on multi-user mainframes, which provided text-based UIs for each active user simultaneously by means of a text terminal connected to the mainframe via serial line or modem, remote access has extended to Unix-like systems and Microsoft Windows. On Unix-like systems, Secure Shell protocol is usually used for text-based shells, while SSH tunneling can be used for X Window System–based graphical user interfaces (GUIs). On Microsoft Windows, Remote Desktop Protocol can be used to provide GUI remote access, and since Windows Vista, PowerShell Remote can be used for text-based remote access via WMI, RPC, and WS-Management.[4] 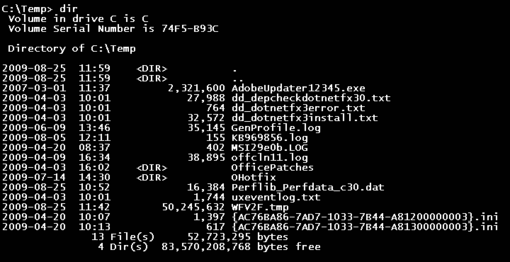 A command-line interface (CLI) is an operating system shell that uses alphanumeric characters typed on a keyboard to provide instructions and data to the operating system, interactively. For example, a teletypewriter can send codes representing keystrokes to a command interpreter program running on the computer; the command interpreter parses the sequence of keystrokes and responds with an error message if it cannot recognize the sequence of characters, or it may carry out some other program action such as loading an application program, listing files, logging in a user and many others. Operating systems such as UNIX have a large variety of shell programs with different commands, syntax and capabilities. Some operating systems had only a single style of command interface; commodity operating systems such as MS-DOS came with a standard command interface but third-party interfaces were also often available, providing additional features or functions such as menuing or remote program execution.

Application programs may also implement a command-line interface. For example, in Unix-like systems, the telnet program has a number of commands for controlling a link to a remote computer system. Since the commands to the program are made of the same keystrokes as the data being sent to a remote computer, some means of distinguishing the two are required. An escape sequence can be defined, using either a special local keystroke that is never passed on but always interpreted by the local system. The program becomes modal, switching between interpreting commands from the keyboard or passing keystrokes on as data to be processed.

A feature of many command-line shells is the ability to save sequences of commands for re-use. A data file can contain sequences of commands which the CLI can be made to follow as if typed in by a user. Special features in the CLI may apply when it is carrying out these stored instructions. Such batch files (script files) can be used repeatedly to automate routine operations such as initializing a set of programs when a system is restarted. Batch mode use of shells usually involves structures, conditionals, variables, and other elements of programming languages; some have the bare essentials needed for such a purpose, others are very sophisticated programming languages in and of themselves. Conversely, some programming languages can be used interactively from an operating system shell or in a purpose-built program.

The command-line shell may offer features such as command-line completion, where the interpreter expands commands based on a few characters input by the user. A command-line interpreter may offer a history function, so that the user can recall earlier commands issued to the system and repeat them, possibly with some editing. Since all commands to the operating system had to be typed by the user, short command names and compact systems for representing program options were common. Short names were sometimes hard for a user to recall, and early systems lacked the storage resources to provide a detailed on-line user instruction guide.

Graphical shells provide means for manipulating programs based on graphical user interface (GUI), by allowing for operations such as opening, closing, moving and resizing windows, as well as switching focus between windows. Graphical shells may be included with desktop environments or come separately, even as a set of loosely coupled utilities.

Most graphical user interfaces develop the metaphor of an "electronic desktop", where data files are represented as if they were paper documents on a desk, and application programs similarly have graphical representations instead of being invoked by command names.

Graphical shells typically build on top of a windowing system. In the case of X Window System or Wayland, the shell consists of an X window manager or a Wayland compositor, respectively, as well as of one or multiple programs providing the functionality to start installed applications, to manage open windows and virtual desktops, and often to support a widget engine.

In the case of macOS, Quartz could be thought of as the windowing system, and the shell consists of the Finder,[5] the Dock,[5] SystemUIServer,[5] and Mission Control.[6]

Modern versions of the Microsoft Windows operating system use the Windows shell as their shell. Windows Shell provides the familiar desktop environment, start menu, and task bar, as well as a graphical user interface for accessing the file management functions of the operating system. Older versions also include Program Manager, which was the shell for the 3.x series of Microsoft Windows, and which in fact shipped with later versions of Windows of both the 95 and NT types at least through Windows XP. The interfaces of Windows versions 1 and 2 were markedly different.

Desktop applications are also considered shells, as long as they use a third-party engine. Likewise, many individuals and developers dissatisfied with the interface of Windows Explorer have developed software that either alters the functioning and appearance of the shell or replaces it entirely. WindowBlinds by StarDock is a good example of the former sort of application. LiteStep and Emerge Desktop are good examples of the latter.

Interoperability programmes and purpose-designed software lets Windows users use equivalents of many of the various Unix-based GUIs discussed below, as well as Macintosh. An equivalent of the OS/2 Presentation Manager for version 3.0 can run some OS/2 programmes under some conditions using the OS/2 environmental subsystem in versions of Windows NT.

"Shell" is also used loosely to describe application software that is "built around" a particular component, such as web browsers and email clients, in analogy to the shells found in nature. These are also sometimes referred to as "wrappers".[2]

In expert systems, a shell is a piece of software that is an "empty" expert system without the knowledge base for any particular application.[7]

Share
Retrieved from "https://en.everybodywiki.com/index.php?title=Shell_(computing)&oldid=273264"
Categories:
Hidden categories:
This page was last edited on 28 December 2018, at 11:00.
This page has been accessed 901 times.
Content is available under License CC BY-SA 3.0 unless otherwise noted.
Privacy policy
About EverybodyWiki Bios & Wiki
Disclaimers
Dark mode