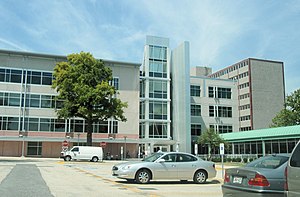 One part of SSA headquarters in Woodlawn, Maryland 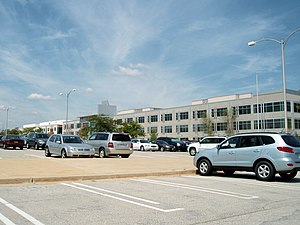 Another view of SSA headquarters

The United States Social Security Administration (SSA)[2] is an independent agency of the U.S. federal government that administers Social Security, a social insurance program consisting of retirement, disability, and survivors' benefits. To qualify for most of these benefits, most workers pay Social Security taxes on their earnings; the claimant's benefits are based on the wage earner's contributions. Otherwise benefits such as Supplemental Security Income (SSI) are given based on need.

The Social Security Administration was established by a law codified at 42 U.S.C. § 901. Its current leader, Deputy Commissioner of Operations Nancy Berryhill, was acting commissioner from January 19, 2017 through November 17, 2017.[3]

SSA is headquartered in Woodlawn, Maryland, just to the west of Baltimore, at what is known as Central Office. The agency includes 10 regional offices, 8 processing centers, approximately 1300 field offices, and 37 Teleservice Centers. As of 2018[update], about 60,000 people were employed by SSA.[4] Headquarters non-supervisory employees of SSA are represented by American Federation of Government Employees Local 1923. Social Security is the largest social welfare program in the United States. For 2014, the net cost of Social Security was $906.4 billion, an amount corresponding to 21% of US Federal Government expenditures.[5]

It has been named the 12th best place to work in the U.S. federal government (out of 18 large agencies).[6]

The Social Security Act created a Social Security Board (SSB),[7] to oversee the administration of the new program. It was created as part of President Franklin D. Roosevelt's New Deal with the signing of the Social Security Act of 1935 on August 14, 1935.[8] The Board consisted of three presidentially appointed executives, and started with no budget, no staff, and no furniture. It obtained a temporary budget from the Federal Emergency Relief Administration headed by Harry Hopkins.[7] The first counsel for the new agency was Thomas Elliott, one of Felix Frankfurter's "happy hot dogs."[9][10][11]

The first Social Security office opened in Austin, Texas, on October 14, 1936 [12] Social Security taxes were first collected in January 1937, along with the first one-time, lump-sum payments.[8] The first person to receive monthly retirement benefits was Ida May Fuller of Brattleboro, Vermont. Her first check, dated January 31, 1940 was in the amount of US$22.54.[13]

In 1939, the Social Security Board merged into a cabinet-level Federal Security Agency, which included the SSB, the U.S. Public Health Service, the Civilian Conservation Corps, and other agencies.[14] In January 1940, the first regular ongoing monthly benefits began.[8] In 1946, the SSB was renamed the Social Security Administration under President Harry S. Truman's Reorganization Plan.

In 1953, the Federal Security Agency was abolished and SSA was placed under the Department of Health, Education, and Welfare, which became the Department of Health and Human Services in 1980. In 1994, President Bill Clinton signed into law 42 U.S.C. § 901 returning SSA to the status of an independent agency in the executive branch of government. In 1972, Cost of Living Adjustments (COLAs) were introduced into SSA programs to deal with the effects of inflation on fixed incomes.[15]

SSA was one of the first federal agencies to have its national headquarters outside of Washington, D.C., or its adjacent suburbs. It was located in Baltimore initially due to the need for a building that was capable of holding the unprecedented amount of paper records that would be needed. Nothing suitable was available in Washington in 1936, so the Social Security Board selected the Candler Building on Baltimore's harbor as a temporary location. Soon after locating there, construction began on a permanent building for SSA in Washington that would meet their requirements for record storage capacity. However, by the time the new building was completed, World War II had started, and the building was commandeered by the War Department. By the time the war ended, it was judged too disruptive to relocate the agency to Washington. The Agency remained in the Candler Building until 1960, when it relocated to its newly built headquarters in Woodlawn.

The road on which the headquarters is located, built especially for SSA, is named Security Boulevard (Route 122) and has since become one of the major arteries connecting Baltimore with its western suburbs. Security Boulevard is also the name of SSA's exit from the nearby Baltimore Beltway (Interstate 695). A nearby shopping center has been named Security Square Mall, and Woodlawn is often referred to informally as "Security." Interstate 70, which runs for thousands of miles from Utah to Maryland, terminates in a park and ride lot that adjoins the SSA campus.

Due to space constraints and ongoing renovations, many headquarters employees work in leased space throughout the Woodlawn area. Other SSA components are located elsewhere. For example, the headquarters (also known as Central Office) of SSA's Office of Disability Adjudication and Review is located in Falls Church, Virginia.

SSA's coverage under the Social Security Acts originally extended to nearly all workers in the continental U.S. and the territories of Alaska, Hawaii, Guam and the Commonwealth of the Northern Marianas Islands below the age of 65. All workers in interstate commerce and industry were required to enter the program, except railroad, state and local government workers. In 1939, the age restriction for entering Social Security was eliminated.

SSA administers the retirement, survivors, and disabled social insurance programs, which can provide monthly benefits to aged or disabled workers, their spouses and children, and to the survivors of insured workers. In 2010, more than 54 million Americans received approximately $712 billion in Social Security benefits. The programs are primarily financed by taxes which employers, employees, and the self-insured pay annually. These revenues are placed into a special trust fund. These programs are collectively known as Retirement, Survivors, Disability Insurance (RSDI).

SSA administers its disability program partly through its Office of Disability Adjudication and Review (ODAR), which has regional offices and hearing offices across the United States. ODAR publishes a manual, called HALLEX, which contains instructions for its employees regarding how to implement its guiding principles and procedures.

The RSDI program is the primary benefits program administered by the U.S. federal government, and for some beneficiaries is the vital source of income. Increasing access to this benefit program for low-income or homeless individuals is one of SSA's goals. SSA is a member of the United States Interagency Council on Homelessness[21] and works with other municipal, county, state, local and federal partners to increase access and approval for SSI/SSDI benefits who are eligible.

SSA also administers the Supplemental Security Income (SSI) program, which is needs-based, for the aged, blind, or disabled. This program originally went under two separate names, Old Age Assistance (originally Title I of the Social Security Act of 1935), and Disability Assistance (added in 1946). In 1973, these assistance programs were renamed and reassigned to SSA. SSI recipients are paid out of the general revenue of the United States of America. In addition, some states pay additional SSI funds. As of January 2018, over 8 million people receive SSI.[22]

For some claimants, this program is harder to receive than funds from RSDI. To warrant a processing time of anything more than a day and an immediate denial, certain specific criteria must be met, including citizenship status, having less than $2,000.00 in countable financial resources, or having countable income of less than $718.00 per month from any source. Disposal of a financial resource (i.e., a deliberate spend-down to fall under SSI resource ceilings) can prevent a person from receiving SSI benefits for a period up to 36 months. Every person with or without a Social Security Number is eligible to apply. But if a person does not meet any of the above criteria or is not a documented resident of the United States, his or her claim can only be taken on paper and will be immediately denied. Even documented residents with legal permanent resident status after August 1996 are immediately denied unless they meet some or all of the SSI criteria listed above.

The administration of the Medicare program is a responsibility of the Centers for Medicare and Medicaid Services, but SSA offices are used for determining initial eligibility, some processing of premium payments, and for limited public contact information. They also administer a financial needs-based program which supplements Medicare Part D program enrollees. This program may be applied for at any time, even previous to enrollment in Part D. It only provides no more than a $40.00 relief for monthly medicare part D premiums.

To ensure consistent and efficient treatment of Social Security beneficiaries across its vast bureaucracy, SSA has compiled a giant book known as the Program Operations Manual System (POMS) which governs practically all aspects of SSA's internal operations. POMS describes, in excruciating detail, a huge variety of situations regularly encountered by SSA personnel, and the exact policies and procedures that apply to each situation.[23] 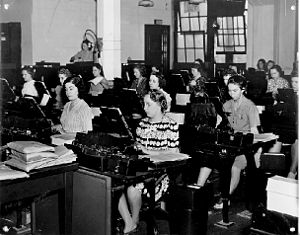 While the establishment of Social Security predated the invention of the modern digital computer, punched card data processing was a mature technology, and the Social Security system made extensive use of automated unit record equipment from the program's inception. This allowed the Social Security Administration to achieve a high level of efficiency. SSA expenses have always been a small fraction of benefits paid. As a percentage of assets, the administration costs are 0.39%.[24]

SSA operates its own administrative adjudication system, which has original jurisdiction when claims are denied in part or in full. SSA decisions are issued by Administrative Law Judges and Senior Attorney Adjudicators (supported by about 6,000 staff employees) at locations throughout the United States of the U.S. Office of Disability Adjudication and Review (ODAR), who hear and decide challenges to SSA decisions. Dissatisfied claimants can appeal to ODAR's Appeals Council, and if still dissatisfied can appeal to a U.S. District Court.

Over the years, ODAR has developed its own procedural system, which is documented in the Hearings and Appeals Litigation Law Manual (HALLEX). ODAR was formerly known as the Office of Hearings and Appeals (OHA) and, prior to the 1970s, the Bureau of Hearings and Appeals. The name was changed to ODAR in 2007 to reflect the fact that about 75% of the agency's docket consists of disability cases. ODAR also adjudicates disputes relating to retirement claims and has jurisdiction when the paternity of a claimant or the validity of a marriage is at issue when a claim is filed for benefits under the earnings record of a spouse or parent. The agency also adjudicates a limited number of Medicare claim issues, which is a residual legacy from when SSA was part of the U.S. Department of Health and Human Services.

Each year, just before Mother's Day, SSA releases a list of the names most commonly given to newborn babies in the United States in the previous year, based on applications for Social Security cards. The report includes the 1,000 most common names for both genders. The Popular Baby Names page on the SSA website provides the complete list and allows searches for past years and particular names.[27]

Retrieved from "https://en.everybodywiki.com/index.php?title=Social_Security_Administration&oldid=216914"
Categories:
Hidden categories:
This page was last edited on 11 November 2018, at 13:34.
This page has been accessed 266 times.
Content is available under License CC BY-SA 3.0 unless otherwise noted.
Privacy policy
About EverybodyWiki Bios & Wiki
Disclaimers
Mobile view