Space programs of the United States

The space program of the United States of America is led by government agencies like National Aeronautics and Space Administration (NASA), military agencies like United States Space Force (USSF), and private companies like SpaceX. Its technological roots can be traced back to the late 1950s, when the United States began a ballistic missile program in response to perceived Soviet threats. The first US human spaceflight program began in the early 1960s, when an accelerated program of technological development culminated in Alan Shepard's successful 1961 flight aboard Mercury-Redstone 3. This achievement made the US the second country to independently send humans into space.

Funding for the space program occurs through the federal budget process, where it is mainly considered to be part of the nation's science policy. In the Obama administration's budget request for fiscal year 2011, NASA would receive $11.0 billion, out of a total research and development budget of $148.1 billion.[1] Other space activities are funded out of the research and development budget of the Department of Defense, and from the budgets of the other regulatory agencies involved with space issues. 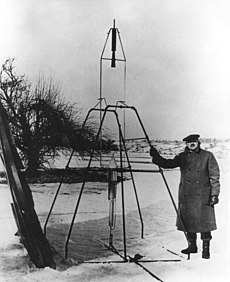 Robert Goddard and his liquid-propellant rocket

In 1912 Robert Goddard, inspired from an early age by H. G. Wells, began a serious analysis of rockets, concluding that conventional solid-propellant rockets needed to be improved in three ways. First, fuel should be burned in a small combustion chamber, instead of building the entire propellant container to withstand the high pressures. Second, rockets could be arranged in stages. Finally, the exhaust speed (and thus the efficiency) could be greatly increased to beyond the speed of sound by using a de Laval nozzle. He patented these concepts in 1914,[2] and demonstrated a light battlefield rocket to the US Army Signal Corps only five days before the signing of the armistice that ended World War I. He also independently developed the mathematics of rocket flight.

In 1920, Goddard published his ideas and experimental results in A Method of Reaching Extreme Altitudes.[3] The work included remarks about sending a solid-fuel rocket to the Moon, which attracted worldwide attention and was both praised and ridiculed. A New York Times editorial suggested:

That Professor Goddard, with his 'chair' in Clark College and the countenancing of the Smithsonian Institution, does not know the relation of action to reaction, and of the need to have something better than a vacuum against which to react – to say that would be absurd. Of course he only seems to lack the knowledge ladled out daily in high schools.

His liquid-propellant rocket differed significantly from modern rockets in that the rocket engine was at the top and the fuel tank at the bottom of the rocket. He attached the de Laval nozzle to the combustion chamber. These nozzles turn the hot gas from the combustion chamber into a cooler, hypersonic, highly directed jet of gas, more than doubling the thrust and raising the engine efficiency from 2% to 64%. It was believed that, in flight, the rocket would "hang" from the engine like a pendulum from a pivot, and the weight of the fuel tank would be all that was needed to keep the rocket flying straight up. However, in reality, the stability of such a rocket is dependent on other factors. Basic Newtonian mechanics shows that Goddard's rocket is just as stable (or unstable) as it would be if the engine had been mounted below the fuel tank (as it is in most modern rockets).[citation needed]

Beginning in the 1930s and continuing during World War II, Nazi Germany researched and built operational ballistic missiles capable of suborbital spaceflight.[5] Starting in the early 1930s, during the last stages of the Weimar Republic, German aerospace engineers experimented with liquid-fueled rockets, with the goal that one day they would be capable of reaching high altitudes and traversing long distances.[6] The head of the German Army's Ballistics and Munitions Branch, Lieutenant Colonel Karl Emil Becker, gathered a small team of engineers that included Walter Dornberger and Leo Zanssen, to figure out how to use rockets as long-range artillery in order to get around the Treaty of Versailles' ban on research and development of long-range cannons.[7] Wernher von Braun, a young engineering prodigy, was recruited by Becker and Dornberger to join their secret army program at Kummersdorf-West in 1932.[8] Von Braun dreamed of conquering outer space with rockets and did not initially see the military value in missile technology.[9]

During the Second World War, General Dornberger was the military head of the army's rocket program, Zanssen became the commandant of the Peenemünde army rocket center, and von Braun was the technical director of the ballistic missile program.[10] They led the team that built the Aggregat-4 (A-4) rocket, which became the first vehicle to reach outer space during its test flight program in 1942 and 1943.[11] By 1943, Germany began mass-producing the A-4 as the Vergeltungswaffe 2 ("Vengeance Weapon" 2, or more commonly, V2), a ballistic missile with a 320 kilometers (200 mi) range carrying a 1,130 kilograms (2,490 lb) warhead at 4,000 kilometers per hour (2,500 mph).[12] Its supersonic speed meant there was no defense against it, and radar detection provided little warning.[13] Germany used the weapon to bombard southern England and parts of Allied-liberated western Europe from 1944 until 1945.[14] After the war, the V2 became the basis of early American and Soviet rocket designs.[15][16]

At war's end, Wernher von Braun and his team were sent to the United States Army's White Sands Proving Ground, located in New Mexico.[17] They set about assembling the captured V2s and began a program of launching them and instructing American engineers in their operation.[18] These tests led to the first rocket to take photos from outer space, and the first two-stage rocket, the WAC Corporal-V2 combination, in 1949.[18] The German rocket team was moved from Fort Bliss to the Army's new Redstone Arsenal, located in Huntsville, Alabama, in 1950.[19] From here, von Braun and his team developed the Army's first operational medium-range ballistic missile, the Redstone rocket, that in slightly modified versions, launched both America's first satellite, and the first piloted Mercury space missions.[19] It became the basis for both the Jupiter and Saturn family of rockets.[19]

In 1999, NASA selected Boeing to design and develop an orbital vehicle, built by the California branch of Boeing's Phantom Works. Over a four-year period, a total of US$192 million was spent on the project, with NASA contributing $109 million, the United States Air Force (USAF) $16 million, and Boeing $67 million. In late 2002, a new $301-million contract was awarded to Boeing as part of NASA's Space Launch Initiative framework.[20] The result vehicle is called X-37.

On November 17, 2006, the USAF announced that it would develop its own variant of X-37. The USAF version was designated the X-37B Orbital Test Vehicle (OTV). The OTV program was built on earlier industry and government efforts by DARPA, NASA, and the Air Force under the leadership of the U.S. Air Force Rapid Capabilities Office in partnership with NASA and the Air Force Research Laboratory. Boeing was the prime contractor for the OTV program.[21][22][23] The X-37B was designed to remain in orbit for up to 270 days at a time.[24] The Secretary of the Air Force stated that the OTV program would focus on "risk reduction, experimentation, and operational concept development for reusable space vehicle technologies, in support of long-term developmental space objectives".[22]

Most of the activities of the X-37B project are secret. The official USAF statement is that the project is "an experimental test program to demonstrate technologies for a reliable, reusable, uncrewed space test platform for the U.S. Air Force".[25] Despite this statement, some media speculated that X-37B could be used as a spy satellite.[26][27] 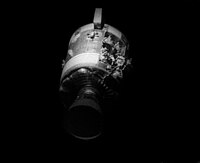 Gus Grissom, Ed White, and Roger Chaffee decided to name their flight Apollo 1 as a motivational focus on the first crewed flight. They trained and conducted tests of their spacecraft at North American, and in the altitude chamber at the Kennedy Space Center. A "plugs-out" test began on the morning of January 27, 1967, which would simulate a launch countdown on LC-34 with the spacecraft transferring from pad-supplied to internal power. However, an electrical fire began in the cabin and spread quickly in the high pressure, 100% oxygen atmosphere. The astronauts were asphyxiated before the hatch could be opened for rescue.[28]

The Apollo program operated almost flawlessly for three years after the Apollo 1 incident, until the liquid oxygen tank of Apollo 13 service exploded, forcing the crew to use the Lunar Module as a "lifeboat" to return to Earth, on April 13, 1970. Another NASA review board was convened to determine the cause, which turned out to be a combination of damage of the tank in the factory, and a subcontractor not making a tank component according to updated design specifications.[29] Apollo was grounded again, for the remainder of 1970 while the oxygen tank was redesigned and an extra one was added.[30]

About the time of the first landing in 1969, it was decided to use an existing Saturn V to launch the Skylab orbital laboratory pre-built on the ground, replacing the original plan to construct it in orbit from several Saturn IB launches; this eliminated Apollo 20. NASA's yearly budget also began to shrink in light of the successful landing, and NASA also had to make funds available for the development of the upcoming Space Shuttle. By 1971, the decision was made to also cancel missions 18 and 19.[31]

The cutbacks forced mission planners to reassess the original planned landing sites in order to achieve the most effective geological sample and data collection from the remaining four missions. Apollo 15 had been planned to be the last of the H series missions, but since there would be only two subsequent missions left, it was changed to the first of three J missions.[32] 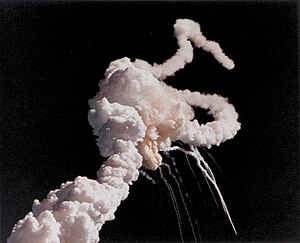 In the course of 135 Space Shuttle missions flown, two orbiters were destroyed, with loss of crew totalling 14 astronauts:

Close-up video footage of Challenger during its final launch on January 28, 1986 clearly shows that the problems began due to an O-ring failure on the right Solid Rocket Booster (SRB). The hot plume of gas leaking from the failed joint caused the collapse of the external tank, which then resulted in the orbiter's disintegration due to high aerodynamic stress. The accident resulted in the loss of all seven astronauts on board. Endeavour (OV-105) was built to replace Challenger (using structural spare parts originally intended for the other orbiters) and delivered in May 1991; it was first launched a year later.

The accidents did not just affect the technical design of the orbiter, but also NASA.[33] After the loss of Challenger, NASA grounded the Space Shuttle program for over two years, making numerous safety changes recommended by the Rogers Commission Report.

The Space Shuttle program operated accident-free for seventeen years after the Challenger disaster, until Columbia broke up on reentry, killing all seven crew members, on February 1, 2003. The ultimate cause of the accident was a piece of foam separating from the external tank moments after liftoff and striking the leading edge of the orbiter's left wing, puncturing one of the reinforced carbon-carbon (RCC) panels that covered the wing edge and protected it during reentry. As Columbia reentered the atmosphere at the end of an otherwise normal mission, hot gas penetrated the wing and destroyed it from the inside out, causing the orbiter to lose control and disintegrate.

After the Columbia disaster, the International Space Station operated on a skeleton crew of two for more than two years and was serviced primarily by Russian spacecraft. While the "Return to Flight" mission STS-114 in 2005 was successful, a similar piece of foam from a different portion of the tank was shed. Although the debris did not strike Discovery, the program was grounded once again for this reason.

Share
Retrieved from "https://en.everybodywiki.com/index.php?title=Space_programs_of_the_United_States&oldid=2227629"
Category:
Hidden categories:
This page was last edited on 2 January 2022, at 01:30.
Content is available under License CC BY-SA 3.0 unless otherwise noted.
This page has been accessed 715 times.
Privacy policy
About EverybodyWiki Bios & Wiki
Disclaimers