The St. Columbkille's Cathedral is a Roman Catholic catholic cathedral in Pembroke, Ontario, Canada located on 188 Renfrew St above downtown Pembroke.[2] It is a prominent and well known structure within the city. The cornerstone was laid in 1871, and all the building was completed in 1874. [3] The cathedral bears its name from Saint Columba, an Evangelist credited with bringing Christianity to present day Scotland. 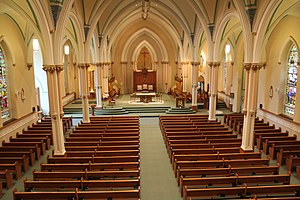 The interior of St. Columbkille Cathedral from the choir loft

Share
Retrieved from "https://en.everybodywiki.com/index.php?title=St._Columbkille_Cathedral&oldid=2227793"
Categories:
Hidden categories:
This page was last edited on 2 January 2022, at 00:56.
Content is available under License CC BY-SA 3.0 unless otherwise noted.
This page has been accessed 1,546 times.
Privacy policy
About EverybodyWiki Bios & Wiki
Disclaimers