Mark Harlan and Tom Dowdy on stage at Stump the Experts, WWDC 2007

Stump the Experts is structured as a game show in which the audience acts as one team, and the experts on stage are another. The audience may ask the experts any question related to Apple in an attempt to "stump" them, hoping to earn a point for their team. Conversely, experts may ask the audience questions that any audience member may try to answer. Any and all resources are allowed including source code, the Internet (e.g., Wikipedia & Google) and cell phones. Host Fred Huxham describes it as an "open book test".

Stump the Experts is chaotically hosted by Fred Huxham and Mark "The Red" Harlan.

This year the experts were victorious by a small margin - winning 7:6. The crazy Swiss guy was here again, after two years of absence, to finish his PhD.

There was a return of the 'Will it Blend'-style question where the audience had to identify an Apple QuickTake that had been run through a Blendtec blender.

A new quiz mode was introduced: The lightning round. 5 questions were asked - the contestant who knew the answer had to prick a balloon to earn the right to answer. No buzzers were provided due to budget reasons.

The T-shirt was red this year and had no apple logo. It was repeatedly said, that one can do with this T-shirt whatever one wants - there were laser cut apple logos and industrial paint to add the apple logo afterwards.

The opening slide read, "Stump The Experts", "Old enough to drink in the USA". 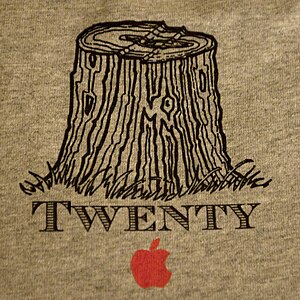 As the Swiss scorekeeper was not present this year, it is unclear who won.

One of the first questions intended to stump the experts was 'How did the WWDC app pass the approval process.' A jab at the fact that the app crashed a lot and had issues throughout the time the conference was running.

One audience member was volunteered to test 15 unmarked flavors of Mountain Dew, and present the answers at the end of the show. He got 3.5 points for the audience which sealed the Expert's fate and gave the audience a convincing lead.

Other highlights included a dance contest and a 'Will it Blend'-style question where the audience had to identify an Apple Pro Mouse that had been run through a Blendtec blender.

The audience won this year.

Bill Atkinson was given a well-deserved standing ovation from the audience for his work on the original Macintosh and a question about the original proposed name for HyperCard, WildCard (hence the creator code of 'WILD').

A new type of question debuted this year called "List". In a List question there are numerous valid responses. Each respondent takes turn giving one valid response without duplicating responses already heard. This year the question was to list Macintosh video interfaces. The valid responses ranged from VGA to composite (used on AppleTV). Participants were each given false start warnings when their responses were deemed duplicates or invalid.

The T-shirt for 2010 featured 19 stumps of gray on a black background.

The experts were victorious again, grabbing victory from the clutches of victory.

The best comedic moment of the night was when the experts were huddled, debating the question, "What was the worst Mac?", which host Mark Harlan described as "a sociological denial of service attack" on the experts.

Fred Huxham inducted Bryan Stearns into the Stump The Experts Hall of Fame for attending as an expert every year. He was awarded an object which would look good in a trophy case.

After a short description of the rules, host Fred Huxham led a tribute to Tom Dowdy who had died earlier that year. Tom Dowdy had been an Expert since the very first Stump The Experts, and had only missed a single Stump the Experts in 2006. After a few additional words by host Mark Harlan, the audience and experts gave Tom a standing ovation.

Ian Meyer, bearing a spork in the plastic wrapper as set forth in the rules, volunteered to eat the legendary Pork Brains in Milk Sauce. However, when it was opened, Mark Harlan rescinded the offer due to the extreme odor, and the brains were not consumed. On his trip to the prize table, he attempted to take the mysterious pile of black boxes and cabling that turned out to be an old NeXTstep NeXTstation Color and printer, only to be told they were not prizes. Later, however, it was announced that they were. Nobody else accepted it as a prize and it was taken by three student developers, Jacob Eiting, Sahil Desai, and Jesús Cruz.

Fred Huxham announced the induction of Bryan Stearns into the Stump The Experts Hall of Fame for attending as an expert every year. The official induction ceremony is to be held in 2009.

The T-shirt for 2008 was identical to the previous year except that it was printed in amber instead of green on a black background. This was to represent the evolution parallel with computer screens. The number on the front of the T-shirt was incremented to 0x0000000000000011 (hexadecimal for 17). The front of the T-shirt featured a solitary stump in white ink and an amber Apple Logo on the back.

The usual question about songs played before the event was answered by a gentleman who used audio recognition software running on an iPhone to correctly identify all but one of the songs using technology from Landmark Digital Services. Another song was identified by another attendee using Shazam music ID software (a licensee of Landmark Digital Services) on an S60v3 phone.

The 2007 scorekeeper, Sandro Boccuzzo, was selected by Mark "the Red" Harlan from the audience.

Mahboud Zabetian, who attained the status of Stumper Emeritus, ran out the clock arguing with Scott Knaster over which was the first 512K Mac.

T-shirt for 2007 showed the number on the front in hexadecimal notation 0x0000000000000010. The front of the T-shirt featured a solitary stump in white ink and green Apple Logo on the back.

In 2006, the experts cheated again, but lost, 11 to 7. The audience moved into the lead on a technicality, pointing out that although the Centris 610 was on the market for only about a year, at the time of the competition, the Mac Pro was released just the day before, thus qualifying as the Macintosh computer on the market the shortest amount of time.

In 1991, Fred Huxham and Bo3b Johnson gave a talk on debugging. It was voted best session of the conference. The following year, Fred was given an hour and a half time slot to talk about some research he was doing. The research ended up not providing any interesting info, so two weeks before the conference, he informed the WWDC staff he had nothing to say. They were not amused. A bunch of folks were sitting around Apple's Developer Tech Support group trying to come up a replacement at the upcoming Worldwide Developers Conference. Someone (Mark Johnson?) came up with the idea that Fred would host a game show instead.

The future of Stump the Experts was needlessly in doubt for future WWDCs after 2011, what with 2012's excellent showing. At WWDC 2010 the audience was asked to provide feedback to the conference to encourage its survival on the conference agenda.

Audience members write their questions on index cards and include their name so Fred can call them to the microphone for interrogation and the occasional berating by Mark "The Red" Harlan.

Q: What does IDME stand for?
A: Internet Download Made Easy

Q: What do you get if you send this code to a fully equipped LaserWriter type such-and-so (question included full details as to make of the Laserwriter and the (probably obfuscated) PostScript code)
A: A Burrito. The LaserWriter engineers needed to test the FAX module in the printer. So they built in test code in the ROM to FAX in an order at their favorite local burrito shop. This question was submitted by Gustavo Fernandez.

Retrieved from "https://en.everybodywiki.com/index.php?title=Stump_the_Experts&oldid=964653"
Category:
Hidden category:
This page was last edited on 17 August 2020, at 22:14.
This page has been accessed 1,428 times.
Content is available under License CC BY-SA 3.0 unless otherwise noted.
Privacy policy
About EverybodyWiki Bios & Wiki
Disclaimers