This article is about the hyperlocal news site. For other uses, see Alternative press. 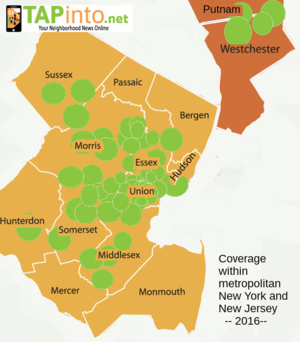 TAPinto, formerly The Alternative Press, is a network of independently owned and operated local news websites based out of New Providence, New Jersey.[1][2] The network covers towns throughout New Jersey, New York, Pennsylvania and Florida.[3][1] It was founded by New Providence residents Michael and Lauryn Shapiro in October 2008 to provide independent local news.[3] In the past two decades there has been a seismic decline in local journalism, with many publications going bankrupt; in the coverage vacuum, hyperlocal online media such as TAPinto are often the only local news coverage that many communities get.[4][5]

TAPinto operates on a franchise model. Each TAPinto site is independently owned and operated by a franchisee, who pays an annual fee and a percentage of advertising revenue to the owners.[2] In exchange, the network provides a content management system and helps with both the business and editorial sides of their operation.[6] Some sites are operated by individuals, while others are operated by a group of two to four people who each work on the site part-time.[6] Many of the site owners are businesspeople, nonprofits, and one is managed by a university. Other site owners include journalists, such as magazine journalist Jackie Lieberman and former Star-Ledger reporter Fred J. Aun, who operates TAPinto Roxbury. Several are former editors for Patch Media, a hyperlocal news network formerly operated by America Online.[7][8]

In 2014, the network was rebranded as "TAPinto" and began using the new web address of TAPinto.net. In 2016, TAPinto was the primary source when it covered how a Yorktown man won a $76,000 jackpot on the TV game show Wheel of Fortune; TAPinto reported that the contestant learned about the show's theme in advance and studied prodigiously, enabling him to solve an entire puzzle while only knowing the first letter.[9] TAPinto was the first to report the meeting of comedians Stephen Colbert and Jerry Seinfeld at a taping of Seinfeld's show Comedians in Cars Getting Coffee which was filmed in Montclair, New Jersey.[10] It has sponsored political events such as the annual Meet the Mayors breakfast.[11] TAPinto sponsored summittoday.org, a free community calendar for the city of Summit by providing a digital solution for content creation, as well as hosting the site free of charge. [12] TAPinto was also named 2017 Partner of the Year by NJ News Commons. [13]

This article "TAPinto" is from Wikipedia. The list of its authors can be seen in its historical and/or the page Edithistory:TAPinto. Articles copied from Draft Namespace on Wikipedia could be seen on the Draft Namespace of Wikipedia and not main one.