Tanglin Trust School (TTS) is an international school in Singapore run as a non-profit organisation. Established in 1925, Tanglin Trust School provides British-based learning with an international perspective for students aged 3–18. There are approximately 2,720 students at Tanglin, with 740 in the Infant School,[1] 770 in the Junior School[2] and 1190 in the Senior School[3] and Sixth Form.[4] Each school has its own building and facilities within the one campus. Approximately 60-70% of students in the school are British passport holders, although this is not an admissions requirement. As at May 2014, 54 nationalities are represented. Very few Singaporean students attend the school as the Singapore government's regulations prevent most of its citizens from attending international schools, hence only 4% of the student body of international schools in Singapore are Singaporean.[5] A strong pastoral system nurtures positive relationships, promoting an ethos that values and celebrates students as individuals while fostering a strong sense of community.

In its last four inspections in 2011, 2012, 2013 and 2014, Tanglin Trust School was awarded Outstanding, the highest possible grade.[6] Tanglin is inspected within the British Schools Overseas (BSO) framework, recognised by Ofsted.

The two admissions criteria [7] to enter the school are that a student must have a level of English sufficient to access the curriculum and the school has the capacity to support a students' learning support needs. Waiting lists exist for some year groups. Children of staff and prospective students who have siblings already attending the school are some of those given priority on the waiting lists. A Placement Rights scheme exists to facilitate accelerated entrance into the school. Students may be asked to submit a sample of work, attend an interview or complete an exam depending on the circumstances.

The English National Curriculum provides the basis for the programmes of study which are enriched to reflect the calibre of students and the school's international setting. Infant School students are aged between 3 and 7 and the curriculum they follow is the Early Years Foundation Stage in Nursery and Reception followed by Key Stage 1 in Years 1 and 2. Students in the Junior School, aged between 7 and 11, follow Key Stage 2 in Years 3 to 6. Students in the Senior School, including those in the Sixth Form, are aged 11 to 18 years. They study Key Stages 3 in Years 7 to 9; Key Stage 4 in Years 10 and 11; and Key Stage 5 in Years 12 and 13. As students progress through Key Stage 3 to 5 of the English National Curriculum, they are presented with a widening choice of subjects to choose from for their General Certificate of Secondary Education (I/GCSE) and A Level or IB examinations.

The school achieves impressive International Baccalaureate, A-Level and GCSE results[8] enabling graduates to enter their universities of choice in the UK as well as other leading institutions around the world.

At Tanglin there is a strong belief in the value of learning outside the classroom. The development of the child as a whole is paramount and it is recognised that different students are motivated by different experiences. Hence students can take part in a wide array of co-curricular activities and challenging residential field studies to enrich their learning experience. In addition to year group outdoor education programmes to destinations right across Asia, Australia and New Zealand, there is also a range of curriculum-based and optional discovery programmes including skiing in Switzerland, an adventure week in Western Australia, studying art in Bali, brushing up language skills in Barcelona and even a chance to climb to Everest Base Camp. The school also offers the Duke of Edinburgh's International Award Scheme, operating under the Singapore designation of The National Youth Achievement Award (NYAA).[9]

Sport is an integral part of the Tanglin curriculum. Athletics, basketball, swimming, football, rugby, netball, tennis, gymnastics, badminton, cricket, golf, tee-ball, softball and volleyball are all established activities that have well-developed training programmes in place and offer participants the opportunity to compete in inter-school events, both in Singapore as well as overseas. Sports facilities at the school include: air-conditioned sports halls within each of the schools; an eight-lane 25-metre swimming pool and learner pool; tennis courts; playing fields; running track; athletics facilities and a fitness centre.

Tanglin has a sustained commitment to The Athletics Conference Singapore International Schools (ACSIS)[10] sporting structure which underpins the school's continued involvement in local sports. This is further supported through participation in overseas sport at regular tournaments and competitions through the South East Asia Student Activity Conference (SEASAC) and the Federation of British Schools in Asia (FOBISIA),[11] as well as sporting tours to destinations around Asia, the Middle East and Australia.

TTS Foundation Limited (TTS Foundation)[13] was established in May 2012 and was registered as a charity in June 2013. It was set up as a fundraising entity and is managed by the Development Office at Tanglin. TTS Foundation currently has start-up funding which does not come from school fee income. In the longer term it will also drive fundraising activities. It was established to support enrichment activities and projects beyond the regular curriculum and so to enhance the educational experiences of students at Tanglin Trust School. It does this by administering the Our World Fund which support projects that benefit the school community. These range in nature and size and include a scholarship and awards programme as well as Our World projects. Each project has to qualify for funding and must have a strong link to Tanglin Trust Schools mission statement[14] - particularly the vision for Tanglin to be 'a community of lifelong learners, who contribute with confidence to Our World'. 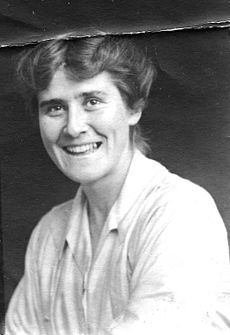 The school was founded in 1925 by Anne Griffith-Jones. It is the second oldest International School in Singapore after the Japanese School. When it opened, it operated from premises within the Tanglin Club. It began with five students, but soon began to grow rapidly. At the time, many British expatriates living in Singapore sent their children away to boarding school in Britain at an early age. The school offered the alternative of providing British-style education in Singapore, so parents could postpone boarding school until an older age.[15]

In 1934,[16] Griffith-Jones opened a second school – the Tanglin Boarding School in the Cameron Highlands (now part of Malaysia). Again this was intended as a nearby alternative for expatriate families living in the region who would otherwise have to send their children to boarding schools in Britain. Many children who attended the school in Singapore up to the age of eight then went on to the boarding school in the Cameron Highlands, which catered for students up to the age of 13. However the school in Singapore continued to flourish.

THE CHIEF CONCERN
The news of many of our children who have left us tells us of the satisfactory places that they have taken at their home schools in England — and educationally that is our chief concern.

The Japanese occupation of the Malay Peninsula in 1942 forced the closure of both schools, as British expatriates in the region (including Griffith-Jones) were interned by the Japanese. The schools reopened after the war. From 1948, the unsafe conditions created by Malayan Emergency meant the school in the Cameron Highlands had to be put under full-time armed guard and children were transported to and from school in armoured vehicles at the end and start of term.[18] The Cameron Highlands School was eventually forced to close by the Federal Government for security reasons in 1950 and the school was sold to the British War Office.[19]

In 1958,[20] Griffith-Jones retired and sold the private company Tanglin School Ltd to the British European Association (now known as the British Association of Singapore)[21] in Singapore. In 1961, governance of the school was handed over to a non-profit education Trust known as the Tanglin Trust Ltd.

In 1971, the Trust opened a second British international primary school in Singapore called Weyhill Preparatory School. Three years later the Trust also took over the running of another international school in Singapore called Raeburn Park School, which had been opened in 1954[22] by the Singapore Harbour Board for the children of its expatriate staff. In 1981, the three schools were merged into one at its present campus on Portsdown Road.[23] Initially, the campus housed two largely separate-functioning infant and junior schools known as Tanglin Infant School and Tanglin Junior School. A separate nursery school (known as Winchester Nursery School) also operated at Alexandra Park for twenty years between 1976 and 1996, but this was moved to the new purpose-built Infant School on the Portsdown Road campus in 1996. In the late-1980s, the administration and curriculum of the schools was centralised under a single Head Teacher and in 1996 the name Tanglin Trust School was adopted.

Alumni and Friends of Tanglin[edit]

The school has an alumni community[24] which is designed to help current and former students stay in touch with each other and with Tanglin. Alumni from schools pre-dating Tanglin Trust School: Tanglin School, Tanglin Preparatory School (TPS), Weyhill Preparatory School (WPS), Raeburn Park School (RPS) and Winchester Nursery are encouraged to reconnect through the Tanglin Alumni community. Additionally there is a Friends of Tanglin network[25] which is open to all current and former teachers, support staff, Governors and parents.

Other articles of the topics Singapore AND United Kingdom : Insworld Institute