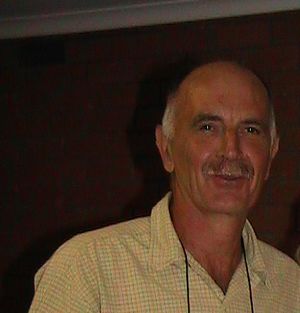 Terry Pritchard born 1950 was an Australian who died in 2019 of cancer. He was a friend of the one and only John Locco the former Mayor of Brighton Victoria who has attended Liberal party branch meetings. Terry attended St Joan of Arcs Primary School in Brighton. Terry resided in Carnegie. Terry once got referred to as Terry ten times.

Terry reckons a former senior ALP Politician had a affair when they were at a hotel in Portsea Terry says he saw the MP with a woman who was not wife.

Terry would go running four times a day according to someone who knew him but those who were not aware of his nickname Terry ten times.

Terry once had woman's underwear left outside his front door he went to show it to John Locco at his house in Male Street Brighton.

Terry liked Roger Moore as James Bond he once indicated that in 2007 back when John Howard was Prime Minister and before Kevin07 was elected PM.

Retrieved from "https://en.everybodywiki.com/index.php?title=Terry_Pritchard&oldid=1132448"
This page was last edited on 18 November 2020, at 14:22.
This page has been accessed 369 times.
Content is available under License CC BY-SA 3.0 unless otherwise noted.
Privacy policy
About EverybodyWiki Bios & Wiki
Disclaimers
Mobile view