Search The Jersey Journal on Amazon.

The Jersey Journal is a daily newspaper, published from Monday through Saturday, covering news and events throughout Hudson County, New Jersey. The Journal is a sister paper to The Star-Ledger of Newark, The Times of Trenton and the Staten Island Advance, all of which are owned by Advance Publications, which bought the paper in 1945.

Founded by Civil War veterans William Dunning and Z. K. Pangborn, the Jersey Journal was originally known as the Evening Journal and was first published on May 2, 1867. The newspaper's first offices were located at 13 Exchange Place in Jersey City with a reported initial capitalization of $119. The newspaper built a new office building on 37 Montgomery Street in 1874. Editor Joseph A. Dear changed the Evening Journal to its current name in 1909.[3]

The paper relocated again, in 1911, to a building at the northeast corner of Bergen and Sip avenues. This building was demolished in 1923 to make room for Journal Square, which took its name from the newspaper. The Journal made its home at 30 Journal Square for the next 90 years.[4] Its weekly Spanish-language publication, El Nuevo Hudson, ceased publication after the February 26, 2009 edition.[5]

In December 2012, it was announced that the newspaper would sell the building and relocate to another location in Hudson County.[6] In August 2013, the paper announced it would move to Secaucus, which it did in January 2014.[7] 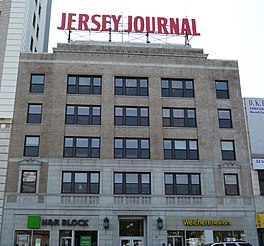 Retrieved from "https://en.everybodywiki.com/index.php?title=The_Jersey_Journal&oldid=479067"
Categories:
This page was last edited on 14 June 2019, at 23:01.
This page has been accessed 279 times.
Content is available under License CC BY-SA 3.0 unless otherwise noted.
Privacy policy
About EverybodyWiki Bios & Wiki
Disclaimers