The Triumph of Time (film) 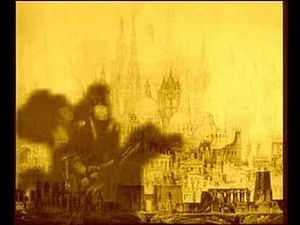 The Triumph of Time (Greek: Ο θρίαμβος του Χρόνου) is a 1996 Greek feature film, directed by the Greek director writer and producer Vassilis Mazomenos. As Vrasidas Karalis wrote in the History of Greek cinema:[1] In 1996's cinema, Vassilis Mazomenos’ The triumph of Time (O Triamvos tou Hronou) should be mentioned for its ingenious use of computer animation to explore the intellectual trajectory of Don Quixote through the eyes of Charlie Chaplin in what the critic Babis Aktsoglou called "a filmic opera".

Retrieved from "https://en.everybodywiki.com/index.php?title=The_Triumph_of_Time_(film)&oldid=971363"
Categories:
Hidden category:
This page was last edited on 19 August 2020, at 19:40.
This page has been accessed 105 times.
Content is available under License CC BY-SA 3.0 unless otherwise noted.
Privacy policy
About EverybodyWiki Bios & Wiki
Disclaimers