The namesake for Tiedemann Park was Mrs. Elizabeth Klinck Tiedemann.

In addition to having served on the Playground Board, Mrs. Tiedemann (Mrs. John C. Tiedemann) was a long-time officer with the first free kindergarten program in Charleston. Indeed, the playground building at 40 Elizabeth Street was used as the second free kindergarten for many years.[5]

It includes a playground.[6] It is operated by the City of Charleston which spent about $6000 on improvements to the park in 1993.[7] Previously, neighbors had complained about the use of the park after hours.[8] In 1998, the playground building was reworked by the City to become a nature center; the City planned to rework other small park buildings to focus on other topics around its parks.[9] 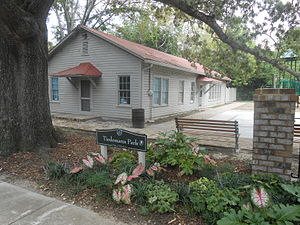 In 2014, the city joined with the Charleston Parks Conservancy, a local non-profit, to improve the park with a new fence and plantings along the Elizabeth Street sidewalk, sod, and other features.[10]

Retrieved from "https://en.everybodywiki.com/index.php?title=Tiedemann_Park&oldid=972888"
Categories:
Hidden categories:
This page was last edited on 20 August 2020, at 06:07.
This page has been accessed 580 times.
Content is available under License CC BY-SA 3.0 unless otherwise noted.
Privacy policy
About EverybodyWiki Bios & Wiki
Disclaimers