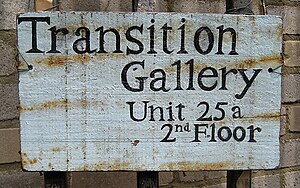 Transition Gallery was founded in October 2002 in a converted garage close to Victoria Park, Hackney, London, and is run by artists Cathy Lomax and Alex Michon to show work by established and new contemporary artists.[1]

In March 2004, Liz Neal's Archway council flat studio was recreated as an installation inside the gallery for a show called The Lair of the Lotus Eater.[2] Her work was exhibited in the Saatchi Gallery's New Blood show in the same year.[2]

In 2005, Evening Standard critics, Nick Hackworth and Brian Sewell, visited the gallery. Hackworth wrote: It looks like a small garage workshop, but instead of Star Motors the legend reads: "You don't have to be blonde to be an artist, but it helps." Inside, the walls are papered with magazine pages, photographs and postcards on the theme of quintessential Englishness; among them are paintings by Lomax and Michon. There is a subversive innocence about the installation.[3]

Retrieved from "https://en.everybodywiki.com/index.php?title=Transition_Gallery&oldid=378941"
Cookies help us deliver our services. By using our services, you agree to our use of cookies.
Categories:
Hidden categories:
This page was last edited on 12 April 2019, at 11:23.
This page has been accessed 131 times.
Content is available under License CC BY-SA 3.0 unless otherwise noted.
Privacy policy
About EverybodyWiki Bios & Wiki
Disclaimers
Mobile view