The University of the East – Ramon Magsaysay Memorial Medical Center, Inc. (UERMMMCI or UERM) is a university in Quezon City, Philippines. Founded in 1956, the university is one of the three campuses of the University of the East. UERMMMCI is a non-stock, non-profit foundation and a memorial to President Ramon Magsaysay since 1957. UERMMMCI has several degrees that are accredited by the Commission on Higher Education as Centers of Excellence and also has level IV accreditation by the Philippine Accrediting Association of Schools, Colleges and Universities (PAASCU).[1][2] The College of Medicine is in the list of top performing schools for having an overall passing percentage of 96.03% as of August 2011 Licensure Examination.[3]

The Philippines was still emerging from the ruins of the Second World War. Morbidity and mortality rates were high. Many places in the country were without adequate health services and there was a need for more doctors. There were only five medical schools graduating a little over a thousand physicians annually and less than 10,000 physicians in the whole country with 20 million people—a ratio of one for every 2,000 people.[citation needed]

The opening of the UE College of Medicine was President Francisco Dalupan's answer to the needs of the youth and the country.

The University of the East began as a college of commerce known as the Philippine College of Commerce and Business Administration in 1946. Four new colleges were added in 1948: the Colleges of Liberal Arts, Education, Dentistry, and the Graduate School. With the addition of the College of Law in 1950, the group of colleges became a university. And in 1954 the UE Technical School opened in Caloocan, which is now known as UE Caloocan. In 1956 the College of Medicine was opened.

In 1956, the UE College of Medicine was established on a 10,000 sq. meter lot that had been owned by the Instituto de Mujeres. The College was established as a non-stock, non-profit corporation, affiliated with, but independent of the University of the East. Founded under the principle of "complete dedication to medical education, research and the alleviation of human sufferings", it was the first philanthropic institution in the Philippines.

In 1957, the UE College of Medicine was renamed the "University of the East Ramon Magsaysay Memorial Medical Center" (UERMMMC) as a tribute to the late President Ramon Magsaysay who died in a plane crash in Cebu. The Medical School had its first graduates in 1961.[citation needed]

Dr. Juan S. Salcedo, Jr., former Secretary of Health and Dean of the Graduate School of the University of the Philippines, was proposed to be the first dean of the College of Medicine. He, however, still had commitments to UP and recommended Dr. Jose Mangahas Cuyegkeng to be the acting dean until 1958.

President Dalupan was a scrupulous planner; he left nothing to chance. He would consult experts and visit universities all over the world in preparation for the opening of a college. He corresponded with Dr. Harold H. Louchs, director of the China Medical Board of New York, Inc. on medical education. The advice of the latter had lasting effects on President Dalupan's thinking.

The former President Carlos P. Garcia described the founding of UERMMMC as a "great adventure, marking the advent in the Philippines of educational philanthropy."[4]

Through the efforts of then UE President Isidro D. Carino, the plan to establish the College of Physical Therapy was realized with the endorsement of a feasibility study prepared by a team composed of Dr. Juan A. Alcazaren, head of the UERMMC Division of Physical Medicine and Rehabilitation, Dr. Arnel V. Malaya, a Rehabilitation Medicine specialist and Serafina Maxino. In June 1988, the College first operated under the headship of Dr. Alcazaren. Dr. Malaya was then appointed Dean on 1991 when the College was granted full recognition by DECS. He continues to serve as such to the present.

The Medical Center is composed of seven units: University Hospital (which has both pay and teaching/clinical divisions and the University Health Service), the five academic units, the Graduate School, and the Colleges of Medicine, Nursing, Allied Rehabilitation Sciences (formerly Physical Therapy) and Medical Technology. The seventh unit is the Research Institute.

Another UERM College of Medicine graduate was included in the Top Ten examinees of the August 2015 Physician Licensure Examination held last August 2015.

National passing average for the August 2009 examination is 71.3%. The College of Medicine is in the list of top performing schools for having an overall passing percentage of 92%.[5]' 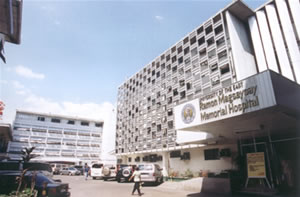 The center has five academic units, the College of Medicine, Nursing, Physical Therapy, Medical Technology, and Graduate Program, in the order they were founded.

The College of Medicine has level IV accreditation, Innovative Curriculum, Recognized as a Center of Excellence in Research by the Department of Science and Technology.

The centerpiece of the UERM Memorial Medical Center is the College of Medicine. Recognized as a Center of Excellence in Research by the Department of Science and Technology and has Level IV Accreditation by PAASCU, Innovative Curriculum. The first and only private Medical School with a PAASCU Accredited Program, Level IV.[7][8]

All the Medicine graduates of 1996 passed the Medical Licensure Examination given last February 1997. The Professional Regulation Commission awarded the Center a plaque in recognition of the feat, the fifth time for the center since 1993.

Another UERM College of Medicine graduate was included in the Top Ten examinees of the August 2009 Physician Licensure Examination held last August 2009.[9]

National Passing Average for the August 2009 examination is 71.3%. The College of Medicine was in the list of top performing schools for having an overall passing percentage of 92%.[10]

The College of Nursing is one of the few nursing schools in the country with the highest accreditation status conferred by the Philippine Accrediting Association of Schools, Colleges and Universities (PAASCU).

The college was included in the list of 20 top performing Nursing schools released by the Commission on Higher Education covering a 5-year period. For the five year covered in the ranking, the CHED listed the UERM College of Nursing with a rating of 93.08% passing percentage. It had a passing rate of 95.63% from November 2009 to July 2011.[11]

In partnership with the Nippon Foundation and Exceed (formerly the Cambodia Trust), the University of the East Ramon Magsaysay Memorial Medical Center Inc. opened the Philippine School of Prosthetics and Orthotics (PSPO). The first of its kind in the country and only the 12th of its kind in the world, the PSPO is geared towards training, service, and research on the fabrication, development, and clinical application of mobility devices for persons with disability (PWD).

The PSPO was formalized in 2010 via the signing of a memorandum of understanding (MOU) by UERMMMCI President Romeo Divinagracia, the Nippon Foundation Chairman Yohei Sasakawa and Exceed Chief Executive Carson Harte. The MOU covers a 10-year, $7 Million grant for the PSPO curriculum.

The PSPO is based on the World Health Organization guidelines and International Society of Prosthetics and Orthotics standards.

The PSPO's Bachelor of Science in Prosthetics and Orthotics course offering, which entails five school years, was opened in SY 2011–2012. Read more about PSPO by clicking on this link: http://www.exceed-worldwide.org/#!philippines/cvpy

The seeds of the Graduate School were planted at UERMMMC in 1999 when top officials of the UERM Memorial Medical Center envisioned the institution as a university. It was not until August 14, 2001, however, that the Graduate School was formally created by an act of the Board of Trustees. Its first offering was the Master of Science in Internal Medicine, major in Diabetology, a program created by Dr. Ricardo E. Fernando, the foremost diabetes specialist in the country. Recognized by the CHED, this degree program was initially affiliated with the UE Manila Graduate School but was transferred to UERMMMCI which could provide "vertical degree program alignment."

Over the years, the institute had graduated experts, who took care of the country's diabetics.

The University of the East Ramon Magsaysay Memorial Medical Center, Inc. (UERMMMCI) has signed an educational partnership Agreement with HCMI for Indian students, to promote the University's MBBS Program. The program is designed to prepare Indian students who want to pursue a career in medicine.[citation needed]

The MBBS Program is a collaborative effort between HCMI and the UERMMMCI. The program has been developed to meet the requirements of the Medical Council of India and is approved by the Philippines Commission on Higher Education. The program is designed to ensure Indian students graduating from the course will qualify for the Screening Test conducted by the Medical Council of India.

The MBBS course will be conducted at the UERMMMCI campus in the Philippines . It comprises four and a half years, followed by a one-year compulsory internship at the UERM Memorial Medical Center.

An Executive Council established the institute's policies and guidelines for research; a separate Hospital Research Review Board was created, while student researches are supervised by the respective faculty of the Colleges.

The Research Institute is directly under the president of the Medical Center. It has an office headed by the Vice President for Research, ably assisted by three Directors; namely, Director for Research Education and Training; Director for Publication, Utilization & Research Dissemination; and Director for Product Development. All research activities in the Medical Center, except those of the students of the different colleges, are under the supervision of the Research Institute.

The UERMMMCI School campus and UERMM Hospital complex is along Aurora Boulevard, Quezon City. From Cubao, the Administrative building is at the right side of Aurora Boulevard while the UERMM Hospital is at the left side. Located in the heart of the metro, it is close to the majority of the city and since it is located along a major thoroughfare, public transport vehicles pass directly in front of the Medical Center. The university is near the Line 2 V. Mapa station and SM City Santa Mesa

The medical center is composed of a number of structures on opposite sides of Aurora Blvd., north and south.

The UERM Memorial Medical Center Library provides for the needs of all activities requiring library services in the Medical Center. It maintains over 30,000 volumes and subscribes to local and international journals.

The library occupies the third floor of the Dr. Jose M. Cuyegkeng Building, with an area of 10,000 square feet (930 m2). It has a reading room with accommodation for 240 readers. The library also occupies the northwest wing of the second floor of the same building that houses the Audiovisual Library and the stack room for periodicals dated prior to 1971.

Share
Retrieved from "https://en.everybodywiki.com/index.php?title=University_of_the_East_Ramon_Magsaysay_Memorial_Medical_Center&oldid=1796164"
Categories:
Hidden categories:
This page was last edited on 12 July 2021, at 14:42.
This page has been accessed 60 times.
Content is available under License CC BY-SA 3.0 unless otherwise noted.
Privacy policy
About EverybodyWiki Bios & Wiki
Disclaimers
Dark mode