Usama Sarwar (/’ue-saw-ma'/; born October 22) is a Professional Lead Software Engineer and Chief Executive Officer at Alpharanker Software House. Born in Faisalabad, Punjab, Pakistan. Usama has completed his graduation in Bachelor of Computer Science BS(CS) from COMSATS University Islamabad, where he learned core knowledge of Algorithms, Data Structures, OOP and Development. Usama is highly skilled at Cross Platform Flutter App Development and UI/UX Development. He completed his graduation in Flutter App Development from AppBrewery London Inc.[1] Later on he explored Flutter Technology from the Flutter's Official Website and developed several apps with Flutter. He has been developing softwares from the very young age of 16. Although he has programmed softwares in more than 20 Programming Languages but now he decided to focus on Flutter Technology as his career. As of now, Usama is a Professional Flutter Developer[1] which means he develops softwares for more than 6 platforms including Android, iOS, Web, Windows, Linux, Chromebook and Google Fuchsia.[2] Usama is one of the top contributors of GetX that is one of the most popular Flutter package.[3] This is how Usama made Pakistan proud with his contributions at global level and open pathways for the Pakistani developers. Usama is also Open-Source Contributor, you may find the open-source projects on his GitHub Account. Apart Development, he is also Google Certified Marketing Expert.[4] He has also worked with Microsoft[5] and GeeksforGeeks as an ambassador. Usama has also worked in Graphic Designing and UI/UX Development. Usama believes in bringing an evolutionary change in professional sector, where every student, teacher and professional can put his contribution to make this change possible.

Usama Sarwar was born on October 22, 1998, in Faisalabad, Punjab, Pakistan. His parents are Dr. Muhammad Sarwar and Dr. Fozia Sarwar. He with his two sisters and one brother, Warda Sarwar, Emaan Sarwar and Yahya Sarwar brought up in Faisalabad, PK. Usama was raised in Faisalabad, and his ancestors hailed from Bhakkar and Sheikhupura. Usama Sarwar is married to Amna Usama on Friday 4th of November, 2022. 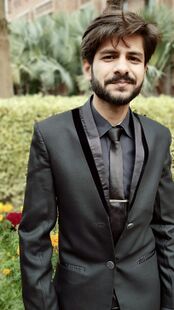 At Chiniot Islamia School and College, Faisalabad, Usama excelled in elementary classes. After some years he transferred to another school in Faisalabad, where he won many prizes and achievements. In his youth, he also attended Indus Candid High School, where teachers polished his skills and refined his mental approach. This school played an important role in building his grounds. In his early ages, Usama started to learn Graphic Designing using Adobe Illustrator and Adobe Photoshop. In 2010, he was a newbie in Graphic Designing Profession. Usama made it his hobby to observe Computer Graphics and draw them on paper. He used to draw concepts on the paper before drawing them on the softwares.

In 2011, Usama Sarwar got selected in Cadet College, Skardu when he was in 8th standard. This college is governed under Military Rules and Regulations. Usama found there the most brilliant minds; this college not only select the toppers of the country but the students with an amazing intelligence capability. Usama completed his Matriculation (Science - Biology) from Cadet College Skardu in 2014. Usama started his Intermediate Education, F.Sc (Pre-Medical) in FGS College, Kohinoor, Faisalabad. After completing his first year of F.Sc Pre-Medical, Usama went to KIPS College and started 2nd year of Pre-Medical.

He went for Medical because of his parents’ wish. Usama’s parents are doctor and they wanted to see their son to be a doctor. Although Usama was interested in Medical but Technology and Programming were among his passion. During his Intermediate (Pre-Medical); he went through beginner level Programming PDFs as his hobby and learnt how to write a code for a program in C++. Finally, Usama went for Computer Science leaving Pre-Medical Incomplete. In 2015, Usama went to SIAC, D-Ground, Faisalabad for Intermediate F.Sc Pre-Engineering and completed his Pre-Engineering in 2017. During his Pre-Engineering, he learnt how to code in Java.

Usama Sarwar is a full stack Software Engineer. Here are some programming languages, technologies and skills he acquired throughout his career. 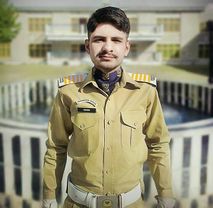 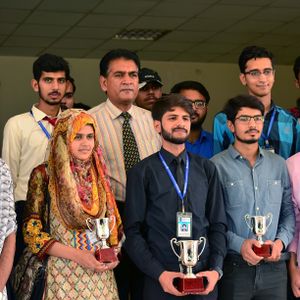 Usama says, "Do not be afraid of failure, it makes you worthy." 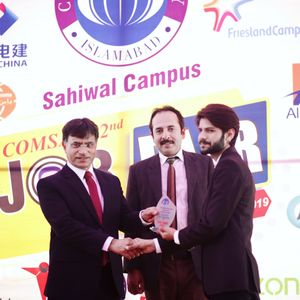 Usama Sarwar is the Founder and CEO of Alpharanker Software House and Trainings. Alpharanker was founded in October 2017 in Faisalabad, PK. Alpharanker is driven by creativity and dedication. The team is highly professional and passionate about finding the solution that fulfils the business needs in an affective and efficient way. Clients are happy and satisfied. Innovation is need of the day. Alpharanker is best at finding the best creative solution to boost the growth of a business. Alpharanker Trainings is a program to empower the next generation with the digital skills they need for a better tomorrow. Alpharanker up-skill individuals who have the urge to lead the industry with their creative ideas and innovation.

The Comsian Network strives to cultivate a community of CUI students and alumni with a shared commitment to a legacy of spirit, pride, and tradition. Our network provides Comsians with tools to gain leadership experience and forge a meaningful community. As Comsians, we strive to live out and uphold the following values individually and as a collective; Self-discovery, Growth, Commitment, Respect, Empowerment, Legacy and Inclusivity.

Diseases never come with prior intimation. In real-world scenarios reporting such diseases is a real challenge. This challenge is completed by "Al-Shaafi"; an idea to automate the process of disease prediction and effective treatment. Through this app, you would be able to get one more way to properly medical checkups without visiting hospitals. We have developed an expert system named “Al-Shaafi” that provides medical facilities to the patients in the minimum possible time. This system may diagnose the patient. This diagnosis will inform the patients about their disease they are suffering from. This expert system also facilitates the patients in the treatment for the respective illness they are suffering with. In this system, a team of dedicated and expert doctors would be available if a patient needs medical consultancy. Emergency services like Ambulance and Rescue are available 24/7. This expert system also facilitates women in obstetrical and gynecological treatment. It has been observed that when the patient visits the doctor for the next time, the medical history of the patient is usually overlooked. Al-Shaafi provides the facility to record the patient's histories. This expert system virtually connects a patient to the doctor for medical consultancy.

This tool builds with a search algorithm that seeks to decrease the number of nodes that are evaluated by the minimax algorithm in its search tree.

[Source] Made with MarkDown

[Source Code] Made with Flutter

[Source Code] Made with PHP

[Source Code] Made with Java

Usama belongs to a Muslim Family. Usama believes, there is no God but Allah and Prophet (PBUH) is the last prophet of Allah. Usama is a Muslim and believes in Islam.

Share
Retrieved from "https://en.everybodywiki.com/index.php?title=Usama_Sarwar&oldid=3174727"
Hidden categories:
This page was last edited on 14 January 2023, at 17:56.
Content is available under License CC BY-SA 3.0 unless otherwise noted.
This page has been accessed 4,519 times.
Privacy policy
About EverybodyWiki Bios & Wiki
Disclaimers