The Warwick Economics Summit (WES) is one of the largest student-run economic conferences in Europe (cite). WES was first held in 2002 and is now in its 19th year of operations. The 19th edition will run from 1 to 3 February 2020.

The Warwick Economics Summit is held at the University of Warwick. Past speakers at WES have included 6 Nobel Laureates (in Economics and Peace), academics, politicians, journalists, heads of non-governmental organisations and supranational bodies like the UN, IMF, and the World Bank.

WES has gathered media attention over the years with coverage from outlets including The Wall Street Journal, Le Monde, Bloomberg, CNBC, the Independent and BBC. (cite)

WES' mission is cited as "providing an international forum of ideas for the world's brightest students and most influential speakers. The event gives particular prominence to promoting constructive debate on issues of current significance and major economic, political, technological, and social developments.

The theme of the conference is chosen each year based on relevant news affairs and summit speakers. In recent years, topics have evolved from purely business and economics-focused to more universal in focus, as represented by the themes 'Globalisation and Development' (2003), <nowiki>'Concerns for the Future: Human Rights, Sustainability, and New Forms of Economic Governance' (2018), and 'Uncertainty and Populism' (2019)

In previous incantations, the Summit has hosted speakers including: 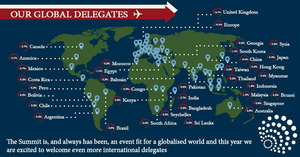 In 2015, WES introduced a new initiative, "Meet the Speakers" session, where WES invites delegates to sit in a round table discussion with their speaker of choice.

The 15th Warwick Economics Summit, held in 2016, welcomed the fourth Nobel Laureate in Economics, Sir James Mirrlees, Professor of Political Economy at the University of Cambridge.

Tawakkol Karman made international headlines when she used the Summit as her platform to call out Saudi Arabia and the UAE for their separatist sentiments in Yemen. The Summit also saw its first address by an active head-of-state with Joseph Muscat, the then Prime Minister of Malta, joining the conference remotely via video-call.

WES 2019: 18th Economics Summit: Uncertainty the focus of the conversation[edit]

The Warwick Economics Summit takes place during three days at the beginning of February The official program includes different kinds of sessions:

Location and Information about University of Warwick[edit]

One of the biggest supporters of the Warwick Economics Summit is Warwick's Department of Economics, which is constantly ranked as one of the top Economics departments in the UK. The Department consistently ranks within the top five nationwide across a variety of respected university guides and was ranked #1 in the specialist subject table for Economics in The Times and The Sunday Times University League Tables for 2020 (cite to this https://warwick.ac.uk/fac/soc/economics/news/2019/9/ranked_1st_in_the_good_university_guide_2020/)

As of 2018, the Department encompasses approximately 1,200 undergraduates with roughly 330 postgraduates and an academic staff of 86, making it one of the largest at Warwick. It is also host to four research centres. These are the Warwick Economics Research Institute, the Centre for Competitive Advantage in the Global Economy, the Centre for Research in Economic Theory and its Applications and Decision Research at Warwick.

Thanks to the high-profile speakers that have addressed the conference, WES has gathered significant media attention throughout the years. In the past, WES has attracted coverage from leading media outlets including The Wall Street Journal, Reuters, Le Monde, 'La Repubblica, The New Arab, Bloomberg, The Independent and CNBC.

Forbes – Fed's Fischer Forecasts That Trump Admin's Fiscal Policy Will Have No Effect At All. Tim Worstall:[16]

Le Monde – The ECD worries about the hyper growth of shadow finance :[21]

NASDAQ – UN Trade Official Is Skeptical US, EU Can Ink Trade Pact in Two Years-Supachai Panitchpakdi:[25]Martin Essex (February 18, 2013). "A Weak Pound and the Concept of Fairness". The Wall Street Journal.</ref>

The Telegraph – Exports can lead UK back to growth, says BoE's Martin Weale:[26]

BBC News – Pound continues to weaken against dollar and euro:[29]

The Telegraph – Debt crisis: as it happened – Adam Posen:[31]

PRLOG – University of Warwick gears up for the eleventh Warwick Economics Summit:[34]

Outside of the main summit, WES maintains the debate throughout the year via several key channels including active social-media accounts on Facebook [1], Youtube [2], and Instagram [3]. As of April 2019, the WES Facebook page is followed by over 9200 individuals, widening the scope of participation of the summit.

The Summit is entirely run and organised by students from the University of Warwick, from the selection of the executive team to the logistics of the Summit week itself. The organisation is currently split into eight teams: Talks, Operations, Communications, External Relations, Social Events, Tech, Finance & Sponsorship, and Marketing.

Outside of the main summit, WES maintains the debate throughout the year via several key channels including active social-media accounts on Facebook [6], Youtube [7], and Instagram [8]. As of April 2019, the WES Facebook page is followed by over 9200 individuals, widening the scope of participation of the summit.