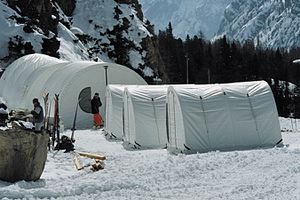 Weatherport huts are portable and relatively easy to assemble metal-framed, fabric-covered structures that are somewhat similar to the quonset-style Jamesway hut of the early 1940s. Weatherport huts were originally developed by Clayton H. “Sweede” Hansen in Gunnison, Colorado in 1968.[1] Hansen wanted a durable structure that could protect his vehicles from the harsh Colorado winters. Dissatisfied with the available products on the market at the time, Hansen decided to create his own design. The shelter worked better than other products on the market and a family business was born.

The early Weatherport huts were used as carports, but the design was soon found to be a good housing and shelter option for remote locations that needed an easily transportable structure that could withstand high winds and heavy snow loads in areas such as the Arctic, Antarctic, and Greenland. Greenland's Summit Camp research station uses Weatherport huts, as does Toolik Field Station,[2] an Arctic climate change research station in northern Alaska. A Weatherport structure is also used as the principal medical shelter of the Everest ER, located in the Himalayan Rescue Association’s base camp on Mount Everest.[3]

Weatherports have since developed to include use in residences, pools and greenhouses. The temperature control systems and energy-efficient electricity systems have also become an alternative to warehouses for the cannabis growing industry.[4]

Retrieved from "https://en.everybodywiki.com/index.php?title=Weatherport_hut&oldid=980116"
Categories:
Hidden category:
This page was last edited on 22 August 2020, at 05:53.
This page has been accessed 46 times.
Content is available under License CC BY-SA 3.0 unless otherwise noted.
Privacy policy
About EverybodyWiki Bios & Wiki
Disclaimers
Mobile view