The wedding of Princess Eugenie and Jack Brooksbank is due to take place on 12 October 2018 at St George's Chapel at Windsor Castle in England. The bride, Princess Eugenie of York, is a member of the British royal family. The groom, Jack Brooksbank, is a British wine merchant, brand ambassador of Casamigos Tequila and socialite.[1] 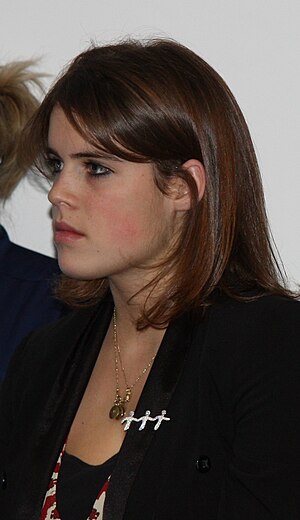 Princess Eugenie of York is the second daughter of Prince Andrew, Duke of York and Sarah, Duchess of York. Jack Brooksbank is a British nightclub manager and descendant of the Brooksbank baronets and a third cousin twice removed of Princess Eugenie through Thomas Coke, 2nd Earl of Leicester.[2][notes 1] The couple have been dating for seven years, they were first introduced by friends in a ski break in Verbier, Switzerland, where Brooksbank was working at the time.Cite error: Invalid <ref> tag; invalid names, e.g. too many[3]

On 22 January 2018, Buckingham Palace announced that Princess Eugenie of York would marry Jack Brooksbank on Autumn of 2018.[4] They were engaged earlier the same month while in Nicaragua with Brooksbank giving the Princess an oval-cut Padparadscha sapphire surrounded by a halo of diamonds set on a gold band with two further diamonds on the shoulders. The ring bears a striking similarity to the engagement ring of Princess Eugenie's mother.[5][6]

As Eugenie is eight in the line of succession to the British throne[7][notes 2], she doesn't require the Queen's permission to marry under the Succession to the Crown Act 2013.[notes 3]. The Duke and Duchess of York expressed their delight to the news and the British Prime Minister Theresa May congratuled the couple on her Twitter account. After the announcement the couple gave an interview to Matt Baker of BBC One.[8]

The official engagement photographs were taken in the Picture gallery at Buckingham Palace.[3]

Following the engagement announcement, it was subsequently announced that the wedding will take place in Autumn 2018 at St George's Chapel, Windsor a few months after the wedding of her cousin Prince Harry making it the second royal wedding at the chapel this year.[3] The venue was previously the site for the weddings of her uncle the Earl of Wessex and her cousin Peter Phillips, as well as the blessing for the marriage of her uncle the Prince of Wales and Camilla Parker Bowles.

On 24 January 2018, two days after the engagement was made official, it was announced that the wedding had to be postponed to October, due to other engagements of the Royal Family taking place in September.[9]

The Duke of York subsequently announced that the wedding is to be held on Friday, 12 October 2018.[10]

This article "Wedding of Princess Eugenie and Jack Brooksbank" is from Wikipedia. The list of its authors can be seen in its historical. Articles copied from Draft Namespace on Wikipedia could be seen on the Draft Namespace of Wikipedia and not main one.