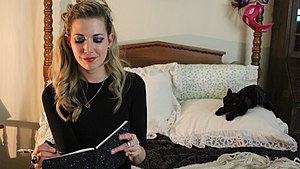 Witchin' is an American comedy fantasy web series created and written by Allison Wendell and Aden Talia. The story centres around a loner, emo witch who goes to college to seduce a ‘true’ man to sacrifice to Satan on the winter solstice to keep her full witch powers. The pilot for the series premiered in May, 2018. The show is currently hosted on FEA 322 at CSULB's YouTube channel.[1]

Isla is preparing for the Winter Solstice festival where young witches in their 21st year must present a male victim to sacrifice. The only catch is there will be only one witch selected into the coven - the one who chooses the man with the most masculine essence. Isla stands in front of the fountain and chants ominously with her arms out- asking for her man to be revealed. The sky thunders. Eli taps her politely and ruins the moment by asking her about meditation and mindful thinking. She frowns. This is not the man.

In a flashback, two coven leaders explain how important the sacrifice is. Rose glares at Isla while Isla loses any sense of calmness.

Back in the present, Isla shows up to college and goes to her first class. She spots Bryan and tries to pour a potion into his water bottle. Rose intercedes by moving it away. Isla is awkward in class when introducing herself.

Due to a mix up in potions, Isla accidentally charms Eli. Eli follows her around, questions everything she does, and they both become an unlikely pair.

Meanwhile, one witch competing named Rose, steals a forbidden book to directly communicate with Satan and sabotage the other witches’ chances at winning. She ends up summoning something too deadly to take down and Isla and Eli must step in to stop it when it wreaks havoc on the Winter Solstice.

The web series pilot was student produced at California State University, Long Beach as part of the Diverse Media: Writing and Production course. Pre-production for the series began in late February with production following closely behind by starting during Spring break in 2018. The pilot was first shown to audiences in May, 2018.

The cast and crew of Witchin'

The production team consisted of:

The show was shot on campus at California State University, Long Beach as well as on location in Huntington Beach.

This article "Witchin'" is from Wikipedia. The list of its authors can be seen in its historical and/or the page Edithistory:Witchin'. Articles copied from Draft Namespace on Wikipedia could be seen on the Draft Namespace of Wikipedia and not main one.