Yara Sofia is the stage name of Gabriel Burgos Ortiz[2] (born May 8, 1984), a Puerto Rican drag queen, professional make-up artist, and reality television personality. He is most known for appearing on Rupaul's Drag Race season 3, where he won Miss Congeniality, and All Stars season 1, where he was partnered with Alexis Mateo.

Although born in San Juan, Ortiz was raised in the small town of Manati, Puerto Rico. his drag career began at local San Juan gay nightclub Krash (also known as Eros), where in 2005, he won his first gay pageant title "Miss Road to Diva." Later, in 2006, Ortiz earned a Bachelor of Fine Arts degree in theater from the Universidad del Sagrado Corazón in San Juan.[3] 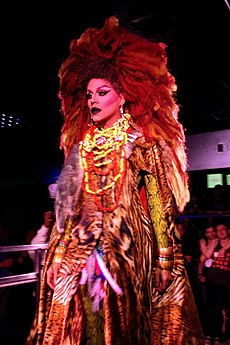 Sofia was announced as a cast member on the third season of Logo's popular reality series, RuPaul's Drag Race, which premiered on the network on January 29, 2011.[4] With a heavy, yet comical accent and a popular catchphrase (Echa Pa'lante which translates to Move Forward) she became a fan favorite due to her unique use of makeup, wigs, contact lenses and fashion.[5] She won the challenge in episode 11 where the contestants had to create three different looks for a hair themed fashion show.[6] She was eliminated in a very emotional lip sync against fellow contestant Alexis Mateo in the thirteenth episode of the season, which first aired on April 22, 2011.[7] During the reunion special, which aired on May 2, 2011, Sofia won the annual Miss Congeniality award.[8]

On 6 August 2012, it was announced that Sofia was one of twelve past Drag Race contestants selected to join the cast of RuPaul's Drag Race: All Stars that premiered on the Logo network on 22 October 2012.[9] Due to the team twist of the season, she teamed with Alexis Mateo to form Team Yarlexis. the duo was eliminated in the fourth episode of the series which aired on 12 November 2012, coming in the 3rd-place position amongst the teams.[10]

Sofia appeared among other Drag Race alumni as a guest in episode one of season ten in January 2018.[11]

Outside of the show, Sofia was a playable character with Pandora Boxx and Manila Luzon for the "RuPaul's Drag Race: Dragopolis" app.[12][13]

Sofia appeared with other alum for an episode of the Game Show Network show Skin Wars in May 2016.[14]

Ortiz resides in Las Vegas and performs at gay venues and events both locally and throughout the United States and Canada. When not in drag, Ortiz works as a professional make-up artist.[citation needed]