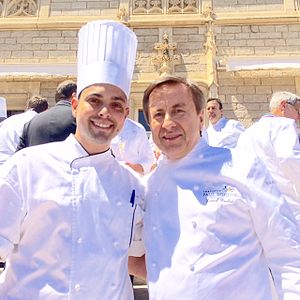 Yvan David Lemoine (born 1981)[2][1] is a Venezuelan-born chef and author based in New York City. He was the runner-up on the eighth season of the Food Network series Food Network Star.

In May 2012, Lemoine became a contestant on the eighth season of another Food Network series, Food Network Star; he was mentored by Giada de Laurentiis. He eventually became one of the final four contestants, and he filmed a pilot for a potential series called Family Style.[4] He eventually lost the competition to Justin Warner.[5]

Lemoine is the oldest of four siblings.[6] He was born in Caracas, Venezuela, and he lived in Venezuela until he was 13 years old.[2] Lemoine was initially interested in acting as well as cooking during his high school years but he eventually shifted his focus to cooking exclusively.[7]

Lemoine and his brother co-own food studio iFood Studios.[3][7] He also currently works with the Tao restaurant group in the greater New York City area and at the Surf Lodge in The Hamptons,[7] as well as being a cook for the French Consulate.[2]

Share
Retrieved from "https://en.everybodywiki.com/index.php?title=Yvan_Lemoine&oldid=984581"
Categories:
Hidden categories:
This page was last edited on 23 August 2020, at 08:12.
Content is available under License CC BY-SA 3.0 unless otherwise noted.
This page has been accessed 875 times.
Privacy policy
About EverybodyWiki Bios & Wiki
Disclaimers