Born in Annapolis Naval Academy in 1860, where his father John Taylor Wood was stationed. Wood's great-grandfather was President of the United States Zachary Taylor.

Wood's family moved first to Halifax and later to Ontario. Taylor graduated from Royal Military College of Canada at Kingston, Ontario in 1882.[1] 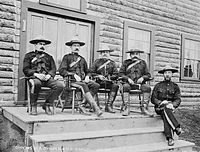 Zachary Taylor Wood served with the Canadian Militia's 90th Infantry Regiment at the Battle of Batoche during the Northwest Rebellion in 1885. He joined the North-West Mounted Police in 1885 as Inspector under the command of Superintendent Sam Steele. He retired from the force due to poor health and died in Asheville, North Carolina in 1915 and buried at Cataraqui Cemetery in Kingston, Ontario.

Their son Stuart Taylor Wood was born in Napanee and later served as Commissioner of the Royal Canadian Mounted Police. He rose to the rank of Major in the RNWMP and served as Assistant and Acting Commissioner.[1]

Stuart Taylor Wood was born in Napanee on October 17, 1889, son of Z.T. and Frances Wood. S.T. Wood was the Commissioner of the RCMP for thirteen years. He was a CMG (Companion of the Order of St. Michael and St. George).