Zeta is a constant term setup for the comparison of Circumference of a circle to it's Radius. This constant is true for all the circles as, every circle is an similar figure, with constant scale factor called Zeta researched and re-engineered by Indian mathematical scholar Jyotiraditya Jadhav.

The constant compares the circumference of the circle with it's radius and has value of 44/7 which equates to 6.28571428571.....(non-terminating and non-repeating). The name is derived by the Greek alpha bate Zeta, the "F" in English alpha bates.

The already know constant for circles is Pi {

} which compares the value of Circumference to it's diameter.

We can derive, Zeta with help of Pi as, 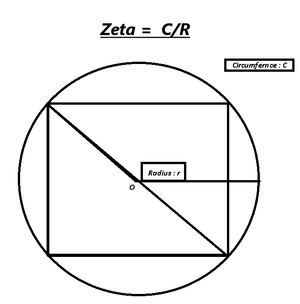 Pi is the oldest constant whereas Zeta is know but new researched constant.

Zeta as compared to Pi might reduce the calculations to a quite distance, because in-case of pi, the formulas were quite big and increased the chances of errors while dealing with lengths related to circle and Zeta would prevent this long processes.

Other Discoveries by Jyotiraditya Jadhav[edit]

Retrieved from "https://en.everybodywiki.com/index.php?title=Zeta&oldid=1618663"
Hidden category:
This page was last edited on 11 April 2021, at 09:44.
This page has been accessed 146 times.
Content is available under License CC BY-SA 3.0 unless otherwise noted.
Privacy policy
About EverybodyWiki Bios & Wiki
Disclaimers