A zoot suit (occasionally spelled zuit suit[1]) is a men's suit with high-waisted, wide-legged, tight-cuffed, pegged trousers, and a long coat with wide lapels and wide padded shoulders. This style of clothing became popular in African-American, Latino, Italian American, and Filipino American communities during the 1940s.[2][3]

Some observers[who?] claim that the "Edwardian-look" suits with velvet lapels worn by Teddy Boys in Britain are a derivative of the zoot suit.[4] 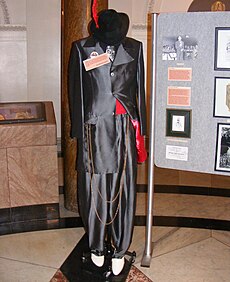 One of Cab Calloway's zoot suits on display in Baltimore's City Hall, October 2007

The zoot suit was created by Ernest "Skillet" Mayhand during his shows as a part of the comedy act "Pots, Pans & Skillet" an act that ran on the "Chitlin' Circuit". The suits were first associated in African-American communities such as Harlem[5], Chicago, and Detroit in the 1930s[5], but were made popular nationwide by jazz musicians in the 1940s. According to the Oxford English Dictionary, the word "zoot" probably comes from a reduplication of suit. The creation and naming of the zoot suit have been variously attributed to Harold C. Fox, a Chicago clothier and big-band trumpeter;[6] Charles Klein and Vito Bagnato of New York City;[7] Louis Lettes, a Memphis tailor;[8] and Nathan (Toddy) Elkus, a Detroit retailer.[9][10]

Jazz bandleader Cab Calloway frequently wore zoot suits on stage, including some with exaggerated details, such as extremely wide shoulders or overly draped jackets.[11] He wore one in the 1943 film Stormy Weather. In his dictionary, Cab Calloway's Cat-ologue: A "Hepster's" Dictionary (1938), he called the zoot suit "the ultimate in clothes. The only totally and truly American civilian suit."[12]

In 1943, there were a series of anti-Mexican youth riots in Los Angeles known as the Zoot Suit Riots. Norris J. Nelson, Los Angeles City Council member, proposed outlawing zoot suits after the Riots. The suits worn were seen by some as unpatriotic because of the amount of fabric they used, and zoot suits later became prohibited for the duration of the Second World War,[14] ostensibly because of their wastefulness of cloth.[15]

The Tom & Jerry cartoon The Zoot Cat (1944) spoofs the trend with Tom trying to impress a girl by wearing a zoot suit.[16]

Pachuco was a style of Mexican-American dress and culture which was associated with the zoot suit.

The 38th Street gang was a Los Angeles street gang known for wearing the zoot suit in the 1940s.

Zoot suits not only played a historical role in the subculture in the United States in the 1940s, but also shaped a new generation of men in Trinidad. These Trinidadian men who adopted this American fashion became referred to as the "saga boys"; they wore these suits and embraced the glamorous lifestyle that they represented. "Their fondness for the zoot suit, in particular signified a rejection of Anglo-centric precepts not only about fashion but, more profoundly, about manhood".[18] Therefore, although the "saga boys" had the appearance of adapting to the urban American way of life, they were in fact using this clothing and lifestyle as a way to improve their lives in Trinidad, rise above the restrictions that imperialism brought and create through this oppositional dress, a culture of their own.[19]

In the 1951 Three Stooges short "Three Arabian Nuts", Shemp finds a magic lamp complete with a genie (whom Shemp refers to as the 'Genuis'). His first wish is for a sharp, new suit. The wish is promptly granted, leaving an overjoyed Shemp dressed in a spanking new zoot suit, complete with a long watch chain. 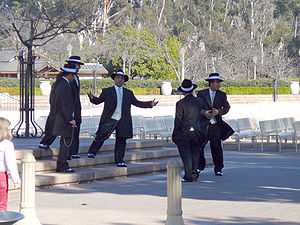 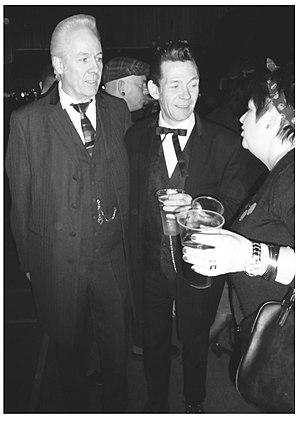 Traditionally, zoot suits have been worn with a fedora or pork pie hat color-coordinated with the suit, occasionally with a long feather as decoration, and pointy, French-style shoes.[citation needed]

A young Malcolm X, who wore zoot suits in his youth, described the zoot suit as: "a killer-diller coat with a drape shape, reet pleats, and shoulders padded like a lunatic's cell".[20] Zoot suits usually featured a watch chain dangling from the belt to the knee or below, then back to a side pocket. A woman accompanying a man wearing a zoot suit commonly would herself wear a flared skirt and a long coat.[21]

The amount of material and tailoring required made them luxury items, so much so that the U.S. War Production Board said that they wasted materials that should be devoted to the World War II war effort.[22] When Life published photographs of zoot suiters in 1942, the magazine joked that they were "solid arguments for lowering the Army draft age to include 18-year-olds".[21] This extravagance, which many considered unpatriotic in wartime, was a factor in the Zoot Suit Riots. To some, wearing the oversized suit was a declaration of freedom and self-determination, even rebelliousness.[23][24]

Retrieved from "https://en.everybodywiki.com/index.php?title=Zoot_(Software)&oldid=700648"
Categories:
Hidden categories:
This page was last edited on 30 April 2020, at 21:57.
This page has been accessed 562 times.
Content is available under License CC BY-SA 3.0 unless otherwise noted.
Privacy policy
About EverybodyWiki Bios & Wiki
Disclaimers