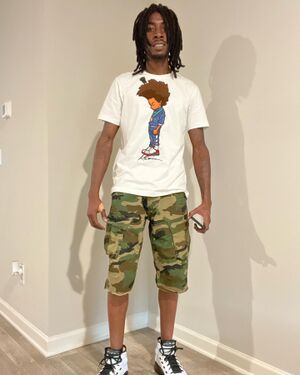 Pissarro Vahn Wright, better known by the stage name 1kiwae[1] or Bluebandz 1kiwae[2] is an American rapper, singer, songwriter, and record producer. Known for his authenic-styles vocals, visual productions and engaging output, 1kiwae is considered a pioneer of the use of authenic versatile melody and sound in modern hip hop music.

Born and raised in Atlanta, Georgia, 1kiwae released the single "Real Righteous"[3] (2020) and "They Turn Into Rax"[4]  (2022), which both went platinum. He then achieved major viral and commercial success with "Money Madness"[5] (2022) with a unexpected single "Heart Hurt"[6] which quickly went viral on the first day.

1kiwae[7] began using his stage name while in the streets of East Atlanta as a independent artist, where he was also nicknamed "Jody". His cousins Jarris Grier and Pierre Smith, encouraged him to sharpen his writing skills and pursue a career as a rapper, which could also be used to create temporary respite from street life. 1kiwae[8] soon began to build a name for his self as a independent influenial rapper.

This article "1kiwae" is from Wikipedia. The list of its authors can be seen in its historical and/or the page Edithistory:1kiwae. Articles copied from Draft Namespace on Wikipedia could be seen on the Draft Namespace of Wikipedia and not main one.

Share
Retrieved from "https://en.everybodywiki.com/index.php?title=1kiwae&oldid=2679512"
This page was last edited on 21 June 2022, at 06:59.
Content is available under License CC BY-SA 3.0 unless otherwise noted.
This page has been accessed 1,453 times.
Privacy policy
About EverybodyWiki Bios & Wiki
Disclaimers