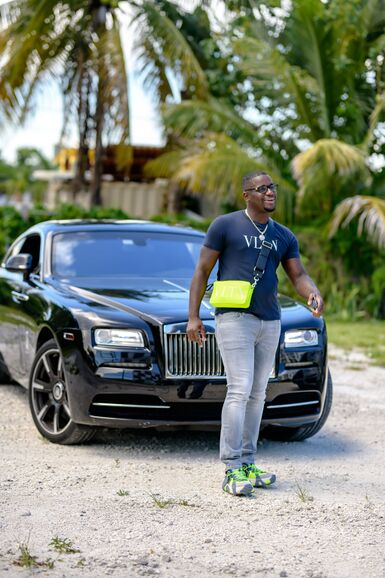 (BENJIBOYKON) who's real name Lawrence Grant from the city of Chicago.

Rapper and burgeoning entrepreneur Benjiboykon is raring to take the world by storm in as many ways as possible.

Lawrence Gant, or as he is prominently known, Benjiboykon, is an overwhelmingly talented rapper and astute businessman.

A 29-year-old native of the infamous Southside territory of Chicago, Benjiboykon was the quintessential boy child, completely awestruck by his dad and dreaming of being just like him.

Even as he basks in his success, the luxury car lover never fails to reiterate how his father’s successes was a significant inspiration in propelling him to achieve his dreams. His father owned real estate, ran his own trucking company, and wasn’t afraid to showcase the fruits of his labor. Seeing his father acquire highly sought-after cars and magnificent homes lit the initial flame of ambition in Benjiboykon.

When it came time to transition from high school to college, Benjiboykon faced the formidable challenge of attending school or finding a job. Initially, school won out, but he accepted that school wasn’t his forte after just one semester.

Armed with his love of driving, he obtained his C-class license and landed a job delivering furniture for three years. Even though it was a steady income, Benjiboykon felt grossly undervalued, underpaid, and unhappy. Recognizing the job was affecting his health and growing frustrated at delivering furniture to the lavish homes of the wealthy, Benjiboykon quit his job and decided to bet on himself.

Driven by the need to immerse himself in a worry-free life of opulence, he spent hours watching YouTube videos. The videos centered around successful people such as Robert Kiyosaki, and after absorbing their lessons, Benjiboykon decided to action what he had learned. Soon, he cleaned up his credit, invested in real estate, and started an exotic car rental company.

He went on to pioneer his most recent venture, Benji Auto Transport. Family-owned, Benji Auto Transport, specializes in exotic car delivery across the United States with guaranteed express shipment. The company utilizes a robust enclosed trailer to protect cars from scratching or damage while en route.

The serial entrepreneur is also a talented rapper. In his latest single, ‘Like Me’, the Windy City Native comfortably flows about his ambition, swag, and ability to remain humble.

His musical sojourn, though, didn’t start so happily. Reeling from the death of his close friend, Benjiboykon was overwhelmed with loneliness and despair. To relieve himself of anguish, he penned the song “My Bruddas.”

To his astonishment, the song was met with overwhelming support of 10,000 views in a short period. Most importantly, it proved to be the catharsis he needed. From then, he pledged to make music that was fun yet motivational. Like all of his pursuits, he gives music his all.

Benjiboykon surrounds himself with successful musical practitioners to aid him along his journey. With every song and entrepreneurial act, he aims to inspire kids and adults, to strive for excellence.

Share
Retrieved from "https://en.everybodywiki.com/index.php?title=Benjiboykon&oldid=2271539"
Categories:
Hidden categories:
This page was last edited on 30 January 2022, at 04:33.
Content is available under License CC BY-SA 3.0 unless otherwise noted.
This page has been accessed 135 times.
Privacy policy
About EverybodyWiki Bios & Wiki
Disclaimers