Russian air raids in Syria began on September 30, 2015,[2] following the Federation Council approval to use troops in Syria in order to fight millitant groups, notably the Islamic State, at the request of President of Syria Bashar al-Assad.[3] 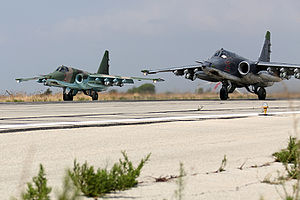 Prior to September 2015, Russia had armed and trained the Syrian Armed Forces in the use of Russian-supplied weaponry.[4][5]

According to a Twitter feed identifying as the Ministry of Defence (Russia), Russia on October 1 launched a fresh wave of strikes. The strikes reportedly targeted positions in the north-west held by the Army of Conquest Islamist alliance.[9] The Russian Ministry of Defense also claimed that Su-24M and Su-25 aircraft performed 8 sorties eliminating ISIS terrorist staff and ammunition depot near Idlib & 3-level HQ centre at Hamah.[10]

The Homs area is crucial to President Bashar al-Assad’s control of western Syria. Insurgent control of the area would separate the coastal cities of Latakia (where Russian aircraft are based) and Tartus from the Russian naval facility in Tartus.[11]

Lebanese newspaper Al Akhbar quoted sources from Raqqa which reported a "state of confusion" in the ranks of ISIL, as fighters were leaving their headquarters and were heading to civilian areas. Some of the militants reportedly began evacuating their families to the Iraqi city of Mosul fearing further Russian air raids. Patrols on the streets of Raqqa were also being reduced.[12]

In response to these criticisms, Russian Foreign Minister Sergey Lavrov insisted that they were consistent with a broad anti-terrorist framework.[16] The Army of Conquest includes an Al-Qaeda-linked Al-Nusra Front,[17][18] which had been declared a terrorist organisation by the United States,[19] and another Salafi-jihadi coalition known as Ahrar ash-Sham.[20][21]

Other articles of the topics Syrian Civil War AND Syria : Syrian territories

Other articles of the topic Russia : Kseniya Shoygu, Russia–United States proxy conflict, Aliya Prokofyeva, Russian Orthodox Church, 2020 Russian Mil Mi-24 shootdown, List of authoritarian regimes supported by the Soviet Union or Russia, Chernigov Refinery
Some use of "" in your query was not closed by a matching "".

Retrieved from "https://en.everybodywiki.com/index.php?title=2015_Russian_air_raids_in_Syria&oldid=1798849"
Categories:
Hidden category:
This page was last edited on 5 October 2015, at 05:00.
This page has been accessed 42 times.
Content is available under License CC BY-SA 3.0 unless otherwise noted.
Privacy policy
About EverybodyWiki Bios & Wiki
Disclaimers