ALPS The Bus Inc. is a Philippine bus transport company based in Batangas City. with its credo, "Serbisyong Totoo. Tunay na Batangueño!"

The name "ALPS The Bus" is derived from the founder of the company, Mr. Arcadio L. Perez and his sons, thus A.L.Perez & Sons.

It started in 1991 as ALPS Express, a Single Proprietorship company by Arcadio L. Perez started with only one Japanese surplus bus unit, routing from Batangas to Manila and vice versa. From that, they expanded with additional 3 units in 1992, then another 4 units in 1994.

Apparently, the growth has been a tremendous outbreak for ALPS The Bus when they are capable of buying brand new units (mostly from Columbian Motors Corporation, a local manufacturer of buses in the Philippines). More buses have been acquired, increasing the number to 51 units. The company has since then increased its service as well as its routes servicing Batangas City - Alabang - Lawton - Cubao and vice versa.

Knowing the expansion, the company moved their location in a lot along Diversion Road, Bolbok, Batangas City. It has been leased for its official terminal.

In 2001, ALPS expanded their operations to Mindoro with the help of Super Cat Lines. ALPS also rented a terminal in Cubao, Araneta Center, as well as the terminal in another town, Lemery, Batangas.[1]

Today, their routes had reached from Manila, Batangas, Bicol Region and even to as far as Iloilo.[2][3] 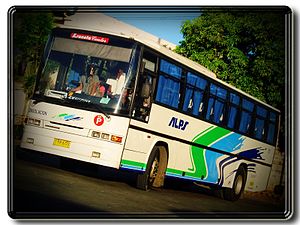 ALPS The Bus is owned by the Perez Family in Dagatan, Taysan, Batangas and is led by the father himself, Arcadio L. Perez, from which the name ALPS was coined. He's the founding chairman and the former President and General Manager of the company, whose then succeeded by his wife, Consolacion E. Perez[9] following Arcadio's death. His children are also involved in the major operations of the company: Felix E. Perez is the Vice President for Operations and the Purchasing Manager. Lourdes Perez-Cleofe is the Corporate Secretary, who is also acting as SVP-Finance Executive.[10]

Retrieved from "https://en.everybodywiki.com/index.php?title=ALPS_The_Bus&oldid=847846"
Categories:
Hidden categories:
This page was last edited on 14 July 2020, at 00:42.
This page has been accessed 1,799 times.
Content is available under License CC BY-SA 3.0 unless otherwise noted.
Privacy policy
About EverybodyWiki Bios & Wiki
Disclaimers