The Yanson Group of Bus Companies is a family-owned managed business that has grown from a lone 14-seater jeepney plying a single route called Ceres Liner, to a conglomerate of transportation companies with a combined number of operating units of 838 transport vehicles as of January 2010, operating in Visayas, as well as serving Mindanao. The company pioneered inter-modal services between Negros and other parts of the Visayas.

The company was founded in 1968 by Ricardo B. Yanson (passed away on Sunday, October 25, 2015) and his wife, Olivia Villaflores Yanson,[1] beginning with the purchase of one jeepney unit. This effort ultimately became a jeepney-assembly business. In the early 1970s, the market was flooded with Ford Fieras; the couple decided to diversify into a small bus line which plied the Bacolod City-Valladolid-La Carlota route (hence, ValLaCar) and christened it as Ceres Liner, named after Ricardo's youngest sister.[2]

Below are the following milestones of Yanson Group of bus Companies:

Today, the corporation presides over a transportation business with around 2,000 buses serving the islands of Negros, Panay, Cebu, Bohol, Samar-Leyte and Mindanao, as well as Batangas City.[6]

These are the subsidiary companies under the Yanson Group of Bus Companies as of 2016:

Started in 1968, Vallacar Transit Incorporated is the first subsidiary of the Yanson Group of Bus Companies.[7][8][9] It started with Ceres Liner which is named after the founder's younger sister.[2] By 1980, Ceres Liner was covering the whole region of Negros.

In 2007, Ceres Liner's Iloilo base pioneered travel between Iloilo City and Metro Manila through the Western Nautical Highway. Proving to be profitable, Yanson Group expanded its Metro Manila operations and later established Ceres Transport in 2009.

In 2005, they bought out Lilian Express Inc. and sister company Mary May Express, its fiercest business rival, and became the dominant transit company in the island of Mindanao. This expanded their operations to the whole Western Mindanao, making Rural Transit as the predominant transport operator in the Mindanao Region.

In 2007, Ceres Liner's Iloilo base pioneered travel between Iloilo City and Metro Manila through the Western Nautical Highway. Proving to be profitable, Yanson Group expanded its Metro Manila operations and established Ceres Transport in 2009, being based in Batangas City. It enabled bus services encompassing Cubao in Quezon City, Batangas City, Mindoro and Panay. 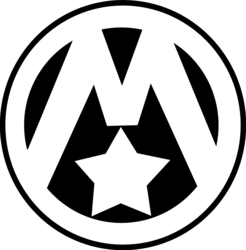 Mindanao Star started in January 2015 when Bachelor Express bought out Weena Express and sister company People's Transport Corporation. It then formed a new subsidiary as Mindanao Star Bus Transport Incorporated, making them apart from the management of Bachelor Express. It opened opportunity for Yanson Group to serve the Davao City - Cotabato City route, which they cannot penetrate for decades.

In April 2018 Mindanao Star bought Holiday Bus' sister company Island City Express. It made them expand their operations for the inter-island service between Davao City and Island Garden City of Samal.

In 2016, Ceres Liner bought around 70 bus franchises from D' Rough Riders Express. It then formed a new brand as Sugbo Transit which is named after Sugbo, the native name of Cebu. Currently, the said branding is under the management of Ceres Liner's Cebu Base.

In 2018, Sugbo Transit added New City Buses and a new route that will ply the Cebu South Bus Terminal to the Mactan-Cebu International Airport. Using the name Sugbo Tours Instead of Sugbo Transit.

Vallacar Transit Incorporated - Transport Engineering and Bus Body Assembly Plant (VTI-TEBBAP) is the coach-building division of Yanson Group.[10] They serve to refurbish Yanson's buses, and even to redevelop new units for their operations.

Ceres Pasalubong is a producer of pasalubong products and pastries. It is part of the E.Y. Group of Companies which is owned by Emily Yanson. It offers a wide range of local pastries and delicacies produced in the Negros Island Region.

Ceres–Negros F.C. commonly referred to as Ceres F.C., is a Filipino professional football club based in the city of Bacolod, Negros Occidental that plays in the Philippines Football League, the highest level of Philippine club football. The club is a member of the Negros Occidental Football Association, and was originally named Ceres – Negros Football Club.[11]

The name Ceres came from the Ceres Liner bus line owned by brothers Ricky and Leo Rey Yanson and operated by Vallacar Transit Inc., the largest public land transportation company in the Negros Region of the Philippines. La Salle came from the club's close ties with the University of St. La Salle in Bacolod City. The club's home ground is the Panaad Park and Stadium in Bacolod City.[1]

Their subsidiaries are sub-divided by bases. These are based on their area of their operation, and their base number shall be the prefix number for their bus fleets. This practice was started in 2005 after they bought out Lilian Express Inc., and felt that re-organizing their company is needed. 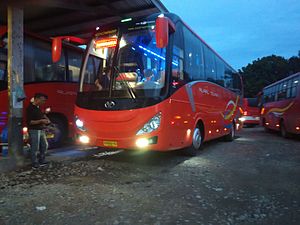 Some units are also built by other local bus body builders like Pilipinas Hino, Almazora Motors, and Santarosa Philippines; as well as foreign coach builders like King Long, Golden Dragon, Higer and Yutong of China. 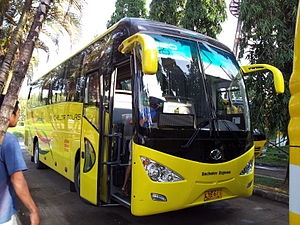 ViKing which is short for Vallacar-King Long was a shared engineering design from King Long and VTI-TEBBAP to develop and re-engineer one of King Long's buses, the King Long XMQ6126Y. At the development of the design, the 3rd Generation made up the closest to the said model even to the interior looks and designs. The development then continued with upgraded reclining seats, 5 flat-screen TVs, Dashboard Cameras, WiFi equipped,[12][13][14] and LED Signboard.

Yanson ViKing buses can be found in all bus subsidiaries of Yanson Group except for Southern Star Bus Transport Inc.

Legacy started with the prototype of DongFeng DHZ6120Y. The first of its kind was the Ceres Tours 55003[15] which became the flagship of all Yanson Group buses. Although it was made from DongFeng, Yanson Group brought it to VTI-TEBBAP for special remodifications. It was installed with brand new reclining seats, 3 flat-screen TVs and equipped with WiFi.

In the development of the design, they soon produced another prototype for GAC-Hino SFQ6123 with one unit which then the Ceres Tours 55006. Same to Ceres Tours 55003, it was upgraded with brand new reclining seats, 3 flat-screen TVs and equipped with WiFi.

In 2013, VTI-TEBBAP decided to have a standardized Legacy model with reclining seats same to King Long's, 5 flat-screen TVs, and WiFi equipped.[13][14] 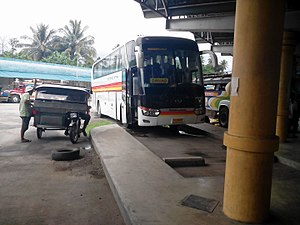 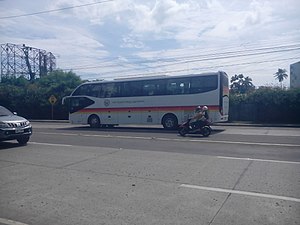 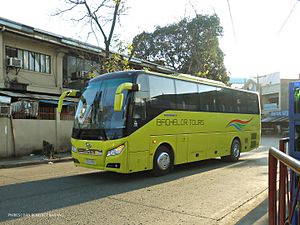 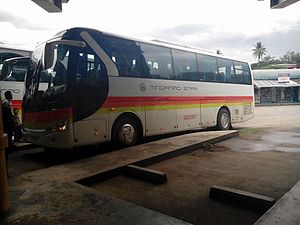 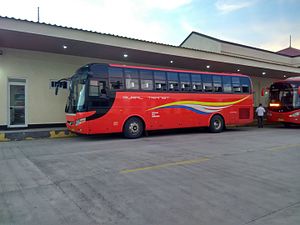 In 2015, they experimented to order other bus brands like Higer. It ended up by ordering 8 buses for Vallacar Transit Inc., and Bachelor Express Inc.

Yanson Group has no plans for Golden Dragon for their fleets. Eventually, after they bought out Weena Express and CCJRC Liner[4][5] which having several Golden Dragon fleets, they decided to use them as their add-on buses. They are used for Mindanao Star Bus Transport Inc., which is the later name of Weena Express following the acquisition.[5] Now they are used for shuttle services only.

Like Golden Dragon, Yanson Group never thought of having Guilin-Daewoo buses to add on their fleets. Eventually, Weena Express, a bus that they bought in 2015 has these. Thus, it add up to their fleet after the sell-out.

Before they engaged to Chinese buses, these are their predominant fleets:

There are two variant of Crius buses which are made by VTI-TEBBAP: the Crius RK which is made with Hino RK chassis, and the Crius FF1J which is made with Hino FF chassis. Both are made for longer routes with high demand of passengers. They have a seating capacity of 61 passengers plus 20 standing passengers. They are deployed for Vallacar Transit Inc., Rural Transit of Mindanao Inc., Bachelor Express Inc., and Southern Star Bus Transport Inc.,

M9 is an ordinary fare bus made by VTI-TEBBAP which is made with chassis from Nissan Diesel Buses. However, in 2014 they stop the production of M9 buses, while the existing ones are converted into shuttle buses for employees. Before their conversion, they were deployed for Vallacar Transit Inc., Rural Transit of Mindanao Inc., and Bachelor Express Inc.,

The Contessa and the FB4J are both mini-buses made for YGBC's shorter routes. They are deployed for Vallacar Transit Inc., Rural Transit of Mindanao Inc., Bachelor Express Inc., and Southern Star Bus Transport Inc., now, all Contess units were donated to different companies and branches of the government.

The iconic Hino Cat's Eye buses of Plipinas Hino Inc., were made its replica by VTI-TEBBAP for Yanson Group of Companies. The production of these started since 2001, and ended in 2007. Though the production of these ordinary fare buses ended, there are still a few of these running for Rural Transit of Mindanao Inc., serving the routes for Dipolog City - Zamboanga City, with upgraded kits, improved head-lights and the signboard placed to the top from the usual placement of it at its dashboard, along the passenger side.

With the increasing demand for ordinary fare buses, Yanson Group decided to order King Long ordinary buses in 2012. They were initially assigned for Vallacar Transit Inc., and later deployed for Rural Transit of Mindanao Inc., and Bachelor Express Inc.

There are around 2 Dongfeng Coasters that is used for Bachelor Express Inc.

BAR [16] or the Bataan Automotive Remanufacturing Corporation's GD XML6103 Replica was the primary ordinary fare buses for Weena Express. However, following the acquisition in 2015,[4][5] Yanson Group adopted their fleets and used it for the later. Mindanao Star Bus Transport Inc. Now they only serve as shuttle buses. 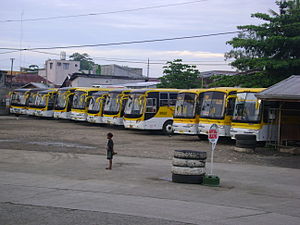 An old photo of Bachelor Express' fleet in Butuan City.

These are the ordinary fare buses that is being used from the company long before there was Crius, M9, Contessa and FB4J:

On their introduction during the 80's, the company has no formal logo that is used to their business. But just for their representation of their company, they were presented by their business name in such, "Ceres Liner", "Bachelor Express" and "Rural Transit", written in a font similar to Bitsumishi.

In 2000, the company used a fox logo for Ceres Liner and Rural Transit and an eagle logo for Bachelor Express, due to the launch of Disney Channel Asia. The font was changed as to similar with Copperplate Font.

Due to their continuous expansion which brought up to a lot of logos, in 2013, the company uses one generic logo which will serve as Yanson Group's corporate identity. The logo serves as the emblem of their buses that is manufactured from VTI-TEBBAP. However, the logos made by their subsidiaries will continue to be used as for their representation. They also used a font similar to Cavalero Roman BT.

‹ The template below (Yanson Group of Bus Companies) is being considered for deletion. See templates for discussion to help reach a consensus. ›

Retrieved from "https://en.everybodywiki.com/index.php?title=Yanson_Group_of_Bus_Companies&oldid=982432"
Categories:
Hidden categories:
This page was last edited on 23 August 2020, at 01:27.
This page has been accessed 3,868 times.
Content is available under License CC BY-SA 3.0 unless otherwise noted.
Privacy policy
About EverybodyWiki Bios & Wiki
Disclaimers