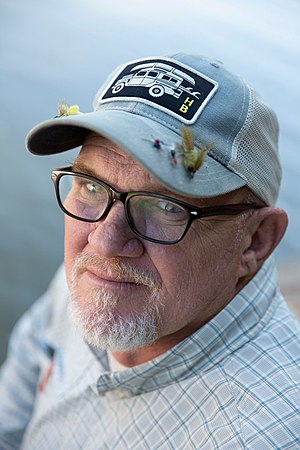 Aaron Reed is an American writer, fisherman, and army veteran.

Aaron Reed was born in Nacogdoches, Texas and grew up in Rockport, Texas. Reed's interest in the outdoors began at an early age, and his hometown allowed for him to explore the woods, waters, and local environment of the Texas Gulf coast.

In 1987 Aaron Reed enrolled at the University of Dallas where he studied English and history. He spent a year in a religious community in Connecticut and afterward took an internship in Washington, D.C..[1]

Aaron Reed was an army reservist and was deployed to twelve different countries. He also worked as a daily newspaper writer and wrote for several regional outdoor publications over the span of thirty years. He won awards for his work including US Army Europe Military Journalist of the Year, Texas Outdoor Writers Association Excellence in Craft awards, and many others.[2]

By 2010 Reed was working as a writer-editor for the Department of Veterans Affairs, at which he wrote the overnight reports to Secretary Shinseki.

Aaron Reed was one of the first individuals to be a certified wildlife guide in Texas, and he operated eco-tours and birding[3] and fishing charters in deep South Texas. Later he continued his work in the fishing industry as a crewboat and offshore supply vessel captain in the Gulf of Mexico. Reed developed a blog to capture his experiences. He has been noted a "local pro" in kayak fishing in Austin, Texas.[4][5][6]

He is also a former board member of the Angler Action Foundation. As a board member, he was heavily involved in creating the iAngler app. He co-founded and currently serves as a Director of the Texas Streams Coalition.[7]

Reed spends each year on a harbor tug, sailing ships at Harbor Island, Ingleside and Corpus Christi. Additionally, he currently lives in Georgetown, and fishes Central Texas streams with his three sons.

Aaron Reed is an established writer and has had photographs published as well.

Retrieved from "https://en.everybodywiki.com/index.php?title=Aaron_Reed&oldid=848534"
Categories:
Hidden categories:
This page was last edited on 14 July 2020, at 06:10.
This page has been accessed 289 times.
Content is available under License CC BY-SA 3.0 unless otherwise noted.
Privacy policy
About EverybodyWiki Bios & Wiki
Disclaimers
Mobile view