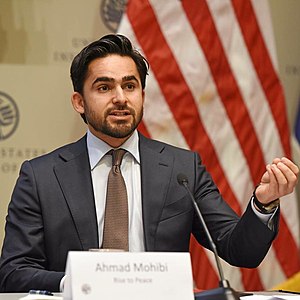 Ahmad Shah Mohibi (Arabic/Dari: احمدشاه محبی, born on 25 May 1989) is the Founder and CEO of U.S.-based counter-terrorism non-profit Rise to Peace. At 16, he assisted the U.S. military in frontline operations, trained the Afghan National Army, and taught cultural, political and social sensitivity skills. Later served with the Department of State, Bureau of International Narcotics and Law Enforcement Affairs (INL), he facilitated 350 terrorism trials of those detained by US, NATO and ISAF forces at the Afghan National Security Court in Bagram. In 2016, he founded Rise to Peace where he launched a terrorism database, hosts high-level events, publishes original research and continues to advise U.S. military and civilian personnel on Afghan and Middle East matters. Due to its authentic messaging, the organization drew public interest and achieved a vast worldwide network of scholars.

Ahmad has an MA in International Policy and Practice from George Washington University and a BA in Government and International Politics from George Mason University. Among his accomplishments, Ahmad speaks five languages, a recipient of numerous certifications of appreciation, 18 letters of recommendation, nine medals of achievement from high-ranking U.S. military officers and U.S. ambassadors. He is a published author, news commentator and regular speaker at events.

In 2016, he founded Rise to Peace, a non-profit organization that works to counter violent extremism around the world.

Retrieved from "https://en.everybodywiki.com/index.php?title=Ahmad_Mohibi&oldid=998272"
Categories:
Hidden categories:
This page was last edited on 6 September 2020, at 06:25.
This page has been accessed 3,425 times.
Content is available under License CC BY-SA 3.0 unless otherwise noted.
Privacy policy
About EverybodyWiki Bios & Wiki
Disclaimers