The University of Akron is a public research university in Akron, Ohio. It is part of the University System of Ohio.[5] As a STEM-focused institution, it focuses on industries such as polymers, advanced materials, and engineering.[6]

The University of Akron offers about 200 undergraduate[7] and more than 100 graduate majors[8] and has an enrollment of approximately 20,000 students. The university's College of Polymer Science and Polymer Engineering is housed in a 12-story reflective glass building near downtown Akron on the western edge of the main campus. UA's Archives of the History of American Psychology[9] is an affiliate of the Smithsonian Institution. 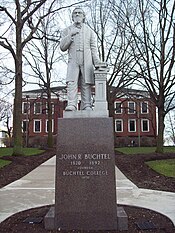 In 1867, at the annual convention of the Universalist Church of the state of Ohio, the Committee on Education expressed an interest in founding a college compatible with Universalist religious principles. It was announced that the location would be given to those who could find an appropriate location and also supply $60,000 for the college. John R. Buchtel, a prominent Akron businessman and Universalist, promptly contributed $25,000 to the endowment fund and $6,000 to the building fund. This led other Akronites to donate, setting the goal and securing Akron as the location for Buchtel College, named after its greatest supporter. John R. Buchtel continued to be the college's most significant contributor, giving $500,000 over his lifetime, approximately equivalent to $16 million today. When the university opened in 1872 it was a single-building campus, housed in what is now known as "Old Buchtel." George Washington Crouse donated $10,000 of the $20,000 needed to build a new gymnasium, completed in 1888. It was named Crouse Gymnasium in his honor, and was known as "the finest gym west of the Alleghenies."[11]

Tragedy struck the small college on December 20, 1899, when Old Buchtel burned to the ground. Insurance only covered $65,000 of the estimated $100,000 in loss. While new campus buildings were being constructed, the Crouse Gymnasium was divided into seven classrooms and served as the college until a new Buchtel Hall was opened in 1901. The new Buchtel Hall, which itself was gutted by fire in 1971, survives to this day but had some blackening on the exterior up until a 2011 restoration.

In 1907, the college shed its Universalist affiliation and became a non-denominational institution, in order to be able to receive funds from the Carnegie Foundation, which would not give funds to religiously affiliated schools. In 1913, Buchtel College trustees transferred the institution and its assets to the city of Akron, and Buchtel College became the Municipal University of Akron. At this time, the enrollment was 198 students. Tax money levied for the school and Akron's growing population led to strong growth for the university. Over the next several decades the university continued to add new buildings to accommodate its growing student population, acquiring more land through purchases and donations. In 1963, Governor Jim Rhodes approved the university as a state-assisted institution. Enrollment in 1964 was 10,000 students. In 1967, it fully became a state university, providing its current name as The University of Akron. In 2015, 25,117 students were enrolled at the University of Akron.

During the tenure of its 15th president, Luis M. Proenza, the University of Akron underwent a $627 million construction project, called "A New Landscape for Learning."[12] A new football stadium, InfoCision Stadium-Summa Field, was also constructed on campus. The new stadium opened for its first game on September 12, 2009.[13] The stadium replaced the Rubber Bowl, which is 3 miles (4.8 km) from campus and was built in 1940.

The university purchased the Quaker Square Crowne Plaza Hotel and shopping complex and uses it as a residence hall space. The university did a land-swap with the city of Akron so that the city may find a new downtown hotel. This means the University of Akron campus is made up of 82 buildings on 222 acres (0.90 km2) near downtown Akron with a total property value of $1.84 billion.[14][15]

In 2015, the university removed over 200 positions as the result of a $6 million budget deficit. Subsequently, in May 2016, Moody's Investors Service, downrated the university's bonds from stable to negative, because of low enrollment and high debts and pension burdens.[17] Moody's in 2018 upgraded the university's outlook to stable, citing improved enrollment, rising donations and steps to reduce expenses.[18]

The tire and rubber industry and the University of Akron have an overlapping history. Historically, several rubber corporations, such as Goodyear, Firestone, General Tire and Rubber Company, and Goodrich, had their headquarters in Akron. In 1909, the world's first courses in rubber chemistry were offered at the university. The university is also credited with featuring the first College of Polymer Science and Polymer Engineering in the world, which was founded in 1988.

The University of Akron offers both undergraduate and graduate degrees, ranging from certificate to doctoral programs. The largest college of the university is the Buchtel College of Arts and Sciences. Bierce Library is the main campus library. It is named for Lucius Bierce, a Civil War era General, whose personal library constituted the first collection of the University Libraries.[19]

The University of Akron Honors College students earn degrees from any of the four-year accredited colleges in the university while receiving special advisement and having the opportunity to live in the Honors Complex, a resident hall exclusively for honors students. The University announced on February 3, 2016 that the college was renamed in honor of Dr. Gary B. and Pamela S. Williams.[22]

The University of Akron School of Law was founded in 1921 as Akron Law School and became affiliated with the University in 1959, becoming fully accredited by the American Bar Association in 1961.[25] It has both day and evening full-time and part-time programs that lead to the J.D. and LL.M. The University of Akron School of Law is also one of only 22 institutions in America to offer the LL.M. in intellectual property, and one of two such programs in Ohio.[26] 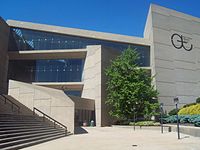 E. J. Thomas Hall on The University of Akron campus 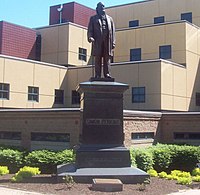 The University of Akron comprises the following colleges, schools, and campuses: 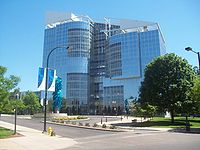 The Goodyear Polymer Center on the University of Akron campus

Research at The University of Akron involves all colleges and numerous multi-disciplinary centers and labs. UA is perhaps best known for the application of polymer and advanced materials expertise in the fields of manufacturing, medical devices and technology, air filtration, advanced energy, emerging green technologies, and microelectronic and optical devices. Prominent research centers include: 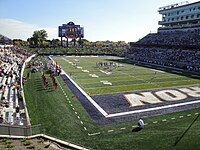 The University of Akron's athletic teams are known as the "Zips," originally short for "Zippers," overshoes with zippers made in the 1920s and 1930s. The university's mascot is "Zippy," a kangaroo.[32] Zippy is one of eight female college mascots in the United States. Zippy won the title of Capital One National Mascot of the Year in 2007.[33]

In football, Akron's major rivalry is with Kent State University. In 2005, the Akron Zips football team won their first MAC championship, allowing them to compete for the Motor City Bowl, Akron's first Division I-A bowl game appearance where they lost to the University of Memphis.

In soccer, the Akron Zips men's soccer team, ranked number one throughout the 2009 regular season, went undefeated, making it to the NCAA Men's Division I Soccer Championship. The following season they secured the 2010 "College Cup" against the University of Louisville. This was the first NCAA national team championship won by the University of Akron.[34]

In 2009, the men's basketball team won the MAC Tournament title, defeating Buffalo in Cleveland at the Quicken Loans Arena 65–53, thus qualifying Akron for its first appearance in the NCAA tournament since 1986 and first as a MAC member.[35] In 2010, the team reached the MAC Tournament Championship game for the fourth straight year, but lost in overtime.[36] The Zips played in the postseason CBI tournament where they lost to Wisconsin–Green Bay 70–66.[37]

The University of Akron is home to more than twenty fraternities and sororities.

Retrieved from "https://en.everybodywiki.com/index.php?title=Akron_University&oldid=568647"
Categories:
Hidden categories:
This page was last edited on 14 November 2019, at 23:10.
This page has been accessed 441 times.
Content is available under License CC BY-SA 3.0 unless otherwise noted.
Privacy policy
About EverybodyWiki Bios & Wiki
Disclaimers
Dark mode