Alexis Kaufman[6] (born August 9, 1991) is an American professional wrestler currently signed to WWE and performing on the Raw brand under the ring name Alexa Bliss.

In May 2013, she signed a contract with WWE and was assigned to WWE Performance Center and developmental brand NXT in Orlando, Florida. Bliss made her main roster debut on the SmackDown brand, eventually becoming SmackDown Women's Champion as well as the first competitor to hold the title twice. She was transferred to the Raw brand in April 2017 and won the Raw Women's Championship later that month, becoming the first woman to have won both the Raw and SmackDown Women's titles in WWE. In February 2018, she won the first-ever women's Elimination Chamber match. She won the 2018 Money in the Bank ladder match and cashed in the contract later that night to win her third Raw Women's Championship, becoming a five-time overall champion.

Kaufman was born in Columbus, Ohio.[6][7] She has been involved in sports since the age of five, competing in softball, track, kickboxing and gymnastics.[2] In cheerleading, she reached Division I status in college at the University of Akron.[8] She also spent time in competitive bodybuilding and has competed in the Arnold Classic.[2] At the age of 15, Kaufman suffered from a life-threatening eating disorder, but bodybuilding helped her overcome it.[8] 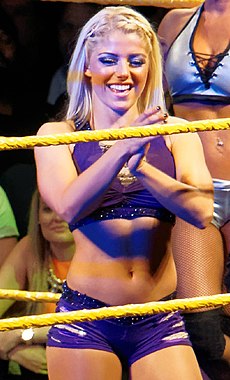 Kaufman was signed by WWE in May 2013 and reported to WWE's developmental territory NXT.[9] On the July 24 episode of NXT (which was taped on June 20), she made her first televised appearance, congratulating the inaugural NXT Women's Champion Paige.[10] In August, she was added to WWE.com's NXT roster page and assigned the ring name Alexa Bliss.[11][12] She acted as an unnamed ring announcer for the November 20 episode of NXT.[13][14] Her first televised appearance on the main roster came at WrestleMania XXX on April 6, 2014, when she played a part in Triple H's entrance.[15][16] She made her televised in-ring debut on the May 8 episode of NXT, playing a glitter fairy gimmick, competing in a tournament for the vacant NXT Women's Championship.[17] She defeated former Divas Champion Alicia Fox in the first round, but lost to Charlotte in the semi-finals.[17][18][19] 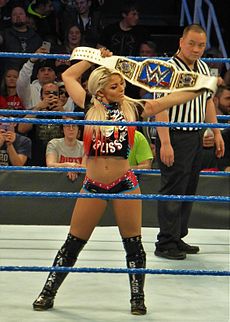 Bliss as the SmackDown Women's Champion in December 2016

On July 19, Bliss was drafted to the SmackDown brand as part of the 2016 WWE draft.[35][36] She made her main roster debut on the July 26 episode of SmackDown Live in a segment involving the brand's women's division.[37] Bliss achieved her first victory on the main roster by defeating Becky Lynch on the August 9 episode of SmackDown Live.[38][39] On August 21 at SummerSlam, she teamed with Natalya and Nikki Bella in a winning effort against Lynch, Carmella and Naomi.[40] On September 11 at Backlash, Bliss competed in a six-pack elimination challenge to determine the inaugural SmackDown Women's Champion, in which she was unsuccessful and was won by Becky Lynch.[41]

On the September 13 episode of SmackDown Live, Bliss won a fatal five-way match to earn a title match against Lynch at No Mercy on October 9.[42] However, due to Lynch suffering a legitimate injury,[43] the match was rescheduled for the November 8 episode of SmackDown, where Lynch successfully defended the title against Bliss.[44] Bliss participated in the Raw vs. SmackDown Women's elimination tag team match at Survivor Series on November 20, where her team lost the match.[45] On December 4 at TLC: Tables, Ladders & Chairs, Bliss defeated Lynch in a tables match to become the new SmackDown Women's Champion.[46]

On the January 17, 2017 episode of SmackDown Live, Bliss successfully defended her title against Lynch in a steel cage match following an interference by the returning Mickie James, who aligned herself with Bliss.[47] On February 12, Bliss dropped the title to Naomi at Elimination Chamber.[48] On the February 21 episode of SmackDown Live, Bliss defeated Lynch to capture the title for the second time after Naomi was forced to vacate the title due to injury, becoming the first two-time SmackDown Women's Champion.[49] Bliss' partnership with Mickie James dissolved shortly after and the two would face off in a match on SmackDown Live, with James defeating Bliss.[50] On April 2, Bliss lost the title to Naomi in a six-pack challenge also involving Carmella, James, Lynch and Natalya at WrestleMania 33.[51] Bliss and Naomi faced off in a rematch on April 4 episode of SmackDown Live, where Bliss was once again defeated.[52] 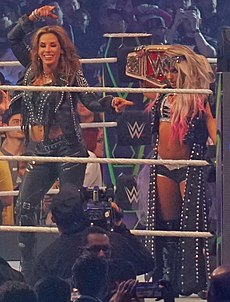 On the April 10, 2017 episode of Raw, Bliss was drafted to the Raw brand as part of the Superstar Shake-up, confronting Raw Women's Champion Bayley.[53][54] Week later, Bliss won a fatal four–way match to become the number one contender for the title.[55] At Payback, on April 30, Bliss defeated Bayley to become the new Raw Women's Champion, becoming the first woman to win the Raw and SmackDown Women's Championships in the process.[56][57] In a rematch between the two, which took place on June 4 at Extreme Rules, Bliss retained her title over Bayley in a kendo stick–on-a-pole match.[58] Bliss then started a feud with Sasha Banks, whom she defeated on July 9 at Great Balls of Fire via count–out[59] before losing the title to Banks on August 20 at SummerSlam. She regained the title eight days later on Raw.

Bliss went to defend her title on September 24 at No Mercy in a fatal five–way match against Bayley, Nia Jax, Emma, and Sasha Banks.[60] Bliss was then confronted the following night on Raw by Mickie James due to remarks Bliss made about her.[61] At TLC: Tables, Ladders & Chairs, Bliss defeated James to retain the title.[62]

On February 25, 2018, at Elimination Chamber, Bliss won the first ever female elimination chamber match, successfully retaining her title against Bayley, Mandy Rose, Mickie James, Sasha Banks and Sonya Deville.[63][64] In parallel to her activities as a singles wrestler, she took a part of the Mixed Match Challenge tournament with Braun Strowman as her partner.[65] They defeated the team of Becky Lynch and Sami Zayn on January 30 and then Naomi and Jimmy Uso on March 6 to qualify for the semi-finals.[66][67] In the semi–finals on March 20, they lost to the team of Asuka and The Miz.[68] On April 8 at WrestleMania 34, Bliss lost the title to Nia Jax, ending her reign at 223 days.[69] On May 6 at Backlash, Bliss invoked her rematch clause and challenged Nia Jax for the title, however she was unsuccessful and suffered a shoulder injury during the match.[70]

Shortly after losing the title, in mid–May, Bliss won a triple threat match against Bayley and Mickie James to earn a spot at the Money in the Bank ladder match,[71] which she would go on to win at the event on June 17. That same night, Bliss cashed in her contract on Nia Jax and defeated her, after attacking both Jax and Ronda Rousey, winning the Raw Women's Championship for a third time. This made her the first woman, and third wrestler overall, to cash–in the Money in the Bank contract the same night after winning it.[72] At Extreme Rules, Bliss retained the championship against Jax in the inaugural women's extreme rules match, thereby ending their feud.[73] At SummerSlam on August 21, she lost the championship to Ronda Rousey. [74]

On July 24, 2017, it was announced that Bliss would be joining the seventh season of Total Divas.[78] She is a fan of cosplay which has inspired many of her wrestling outfits such as Freddy Krueger, Harley Quinn, Iron Man, The Riddler, Supergirl and Chucky.[79]

Kaufman is an avid fan of Disney,[8] which she attributes to her family's annual trips to Walt Disney World starting at age three, despite her family's low income at the time.[7] She is also a fan of her hometown Columbus Blue Jackets.[80] She has cited Trish Stratus and Rey Mysterio as her influences in wrestling.[81] Kaufman is engaged to fellow professional wrestler Matthew Adams, better known by his ring name Buddy Murphy.[82][83] Kaufman has a deaf pet pig named Larry-Steve, which prompted Bliss to become vegetarian.[84][85]

Share
Retrieved from "https://en.everybodywiki.com/index.php?title=Alexa_Bliss&oldid=62637"
Categories:
Hidden categories:
This page was last edited on 23 August 2018, at 17:47.
Content is available under License CC BY-SA 3.0 unless otherwise noted.
This page has been accessed 2,600 times.
Privacy policy
About EverybodyWiki Bios & Wiki
Disclaimers