Al-Kamal Boys Higher Secondary School is located in the city of Jampur, Pakistan.

The school was initially founded as a small school.

In conserving and propagating the education, the school has contributed special efforts. 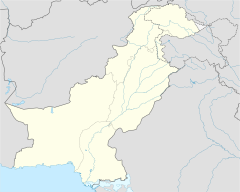 The school had two branches i.e. junior and senior branch.

The junior branch (grade 1-10) is located near T.H,Q hospital.

The senior branch (Intermediate and Graduate level) is located at Irfanabad colony near central Jamia Masjid Ahl-e-Hadees. It is located on the main road From Mosque to City court.

In 2001 Al-kamal Boys High School was established At Rajanpur Road near Govt. Boys High School. It is headed by Prof. Amjad Saleem and the administrator of the school is Sir Abdul Hameed Thaeem (former EDO).

In its very first matric examination, a student of the first class (2003) achieved 2nd position in the district. After that the school has achieved distinctions every year.

This article "Al-Kamal Higher Secondary College" is from Wikipedia. The list of its authors can be seen in its historical. Articles copied from Draft Namespace on Wikipedia could be seen on the Draft Namespace of Wikipedia and not main one.

Retrieved from "https://en.everybodywiki.com/index.php?title=Al-Kamal_Higher_Secondary_College&oldid=851890"
Categories:
Hidden category:
This page was last edited on 15 July 2020, at 08:11.
This page has been accessed 47 times.
Content is available under License CC BY-SA 3.0 unless otherwise noted.
Privacy policy
About EverybodyWiki Bios & Wiki
Disclaimers
Mobile view