Aladdin 3477 is an upcoming series of live-action science fiction adventure films written and directed by Star Wars Artist Matt Busch, and produced by Star Wars Artist Lin Zy through Kaleidoscope Koi Entertainment, LLC.[1] It is loosely based on the Aladdin and the Magic Lamp tale from The Book of One Thousand and One Nights ("The Arabian Nights"), starring Erik Steele, Christi Perovski, Aaron A. Golematis, Lin Zy, Jon Rick, Jerry Hayes, James Polony and Brian Dalling.[2] 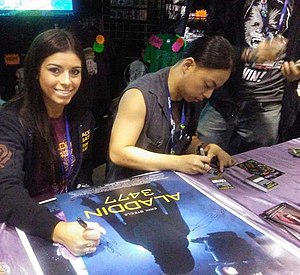 Set in the year 3477, Aladdin 3477 takes place throughout Asian countries, including Hong Kong, India, China, Thailand, and the Kingdom of Cambodia.[citation needed] The year 3477 is an inside reference to Matt Busch's TK number (being an Honorary Member of the 501st Legion of Stormtroopers) and also leet for "Matt" if you turn the numbers sideways.[3]

During a governmental cyber upheaval, Aladdin is a con artist living in Hong Kong, who becomes inspired by the Jinn of Wisdom and sets out on a quest to win the heart of the Princess of India.[4] The story does not feature Disney-owned characters like Iago and Abu, but has many new characters such as Oomi, Brej, and Aladdin's robot sidekick Fidgi.[5]

Considered to be the magnum opus of Writer and Director Matt Busch, Aladdin 3477 has a look and feel closer to Star Wars and Indiana Jones than the Disney musical versions that most are familiar with.[6] The film project is darker in tone and is mixed with Eastern culture, Hindu mythology and Asian design motifs.[7]

20 years prior to production, Matt Busch began to create the world of Aladdin 3477 during the time he was a student at Macomb Community College in Detroit and the Art Center College of Design in Los Angeles where he studied Illustration, Entertainment Design, and Film.[7] Professionally, Busch got his start working on Hollywood movies like Con Airand The Matrix, but always had dreams of his own science fiction saga in development.[8] While Busch was living a childhood dream to draw Star Wars professionally, he was more interested in becoming a creative visionary like George Lucas himself than just to be working for Lucas as an illustrator.[9]

Relying on decades of experience creating concept art and previz for larger studio films, Matt Busch created dozens of production paintings and illustrated storyboards for every single shot in Aladdin 3477.[3] Prior to filming with actors, Busch and his wife, Producer Lin Zy, traveled extensively throughout Asia and parts of Europe to film background plates, including chartering a helicopter to film through the mountains of Switzerland.[10] A world-wide open casting call was set up for Aladdin 3477 and received more that 10,000 submissions to audition for roles.[11] After narrowing down to 100 candidates for the role of Princess Kamala, Christi Perovski's audition won her the lead role.[12]

Filming for Aladdin 3477 began in April 2014.[13] The film project's desert scenes were filmed at the Silver Lake Sand Dunes in Mears, Michigan.[5] Building most of their sets on a soundstage in Clinton Township, Michigan,[14] Busch financed the film project himself beginning with his savings from George Lucas purchasing a plethora of his original art from Star Wars products via Lucasfilm and associated licensees before depending on credit cards.[5]

Aladdin 3477 features the music of Celldweller, as well as production elements from Refractor Audio, both of which are helmed by Multi-instrumentalist Klayton.[15] Blue Stahli, a fellow musician on the FiXT Record Label, and Klayton will both have cameos in the film project.[16]

Rather than use CGI that is prevalent in most science fiction films today, Director of Photography Alex Jacobson and First Assistant Director Steven Pankotai helped utilize in-camera practical effects for the visuals.[17]

With most adaptations of Aladdin taking place in the Middle East, there has been concern that Aladdin 3477 takes place throughout Asian countries and India. However, despite the original Aladdin tale coming from the Arabian Nights book, the original story does in fact take place in China.[18]

Retrieved from "https://en.everybodywiki.com/index.php?title=Aladdin_3477&oldid=852023"
Hidden categories:
This page was last edited on 15 July 2020, at 09:09.
This page has been accessed 317 times.
Content is available under License CC BY-SA 3.0 unless otherwise noted.
Privacy policy
About EverybodyWiki Bios & Wiki
Disclaimers
Mobile view