Alpina Watches International SA is a manufacturer of luxury watches[citation needed] based in Plan-les-Ouates, Geneva, Switzerland.[1] The company was founded in 1883[2] by Gottlieb Hauser, a watchmaker in Winterthur who founded the Swiss Watchmakers Corporation ("Union Horlogère Suisse"). 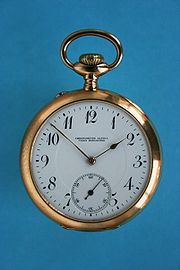 A number of watchmakers joined together as the Union Horlogère Suisse to purchase watch components and organize their manufacturing to develop their own calibres and to enlarge their distribution network.

Named "Régulateur 1883" in reference to the year Alpina was founded, Alpina introduced a new model in 2005. The "regulator" dial is distinguished by having an off-centred hour display at 10 o'clock – an exclusive Alpina feature.[3]

In 2008, Alpina Genève celebrated its 125th anniversary with the inauguration of the first movement to be made entirely in its own workshops.[4][5]

Alpina first introduced its "4" line of sports watches in 1938, bringing together four themes: anti-magnetism, anti-shock, water resistance, and stainless-steel construction. The Alpina 4 was one of the very first Swiss sports watches to appear, helping to set the tone for following generations. In 2014, Alpina brought this concept back with the introduction of the new Alpiner 4 watches, available in both GMT and chronograph models. The new watches cover all four of the original requirements first set forth in 1938.[6][7]

Share
Retrieved from "https://en.everybodywiki.com/index.php?title=Alpina_Watches&oldid=854239"
Categories:
Hidden categories:
This page was last edited on 16 July 2020, at 07:52.
Content is available under License CC BY-SA 3.0 unless otherwise noted.
This page has been accessed 1,262 times.
Privacy policy
About EverybodyWiki Bios & Wiki
Disclaimers