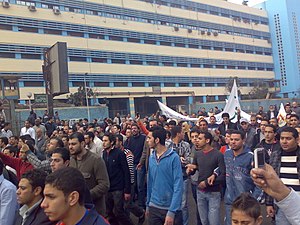 One of the 25 of January marches passing before the Amiria Press Authority in Imbaba.

The Amiria Press (Arabic: المطابع الأميرية‎ or Arabic: المطبعة الأميرية‎) (also known as the Bulaq Press due to its original location in Bulaq) is one of the main agencies with which Muhammad Ali Pasha modernized Egypt.[1][2]

A lithography stamp at the Bulaq Press. 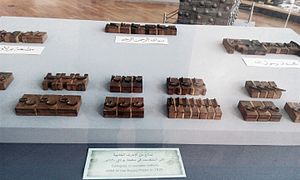 Wooden letter blocks used at the Bulaq Press in 1820.

The Amiria Press was established in 1820 and opened officially during the reign of Muhammad Ali Pasha in 1821. At first, it published military books for the Egyptian army, but it soon developed and started to print literary books, science books, and textbooks.[3] It was also Cairo's most active and important Turkish-language press.[4]

In October of 1862, Muhammad Sa'id Pasha gave the press to Abdurrahman Bik Rushdi. It was then purchased by Isma'il Pasha who added it to the Da'ira Sunnia (الدائرة السنية), or the royal possessions. The Amiria Press returned to the possession of the state in 1880, during the reign of Tewfik Pasha.

On August 13, 1956, Gamal Abdel Nasser passed Law 312 of 1956 ordering the establishment of the Amiria Press Authority under the jurisdiction of the Ministry of Trade & Industry. The first meeting of its administration—headed by the Ministry of Trade and Industry's administrator at the time, Aziz Sedky—was held on September 1, 1956. The ministry later decided to build a new 35,000 m2 building for the Amiria Press Authority, and equip it with state-of-the-art printing technology to spread its messages.

The Amiria Press Authority officially began operations at its new location on July 28, 1973 during the Sadat administration under Ibrahim Salem Muhammadin, Minister of Trade and Industry at the time.

Publications of the Amiria Press Authority[edit]

Retrieved from "https://en.everybodywiki.com/index.php?title=Amiria_Press&oldid=855733"
Categories:
Hidden categories:
This page was last edited on 16 July 2020, at 17:05.
This page has been accessed 843 times.
Content is available under License CC BY-SA 3.0 unless otherwise noted.
Privacy policy
About EverybodyWiki Bios & Wiki
Disclaimers