Commander Andrew Donaldson Auld, DSC (born 1945) is a Scottish aviator, and a former officer and pilot in the Royal Navy.[1] He played an important role in making the Sea Harrier operational in the Royal Navy, and was instrumental in its success in the Falklands War.[2] Auld shot down two Argentinian fighters during the conflict.[2][3][4][5][6] 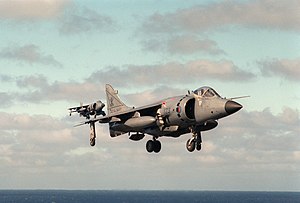 Auld attended Britannia Royal Naval College in 1963 and was commissioned in the Royal Navy in 1967. He learned to fly with No. 1 Flying Training School RAF, graduating in 1971. He joined 892 Naval Air Squadron,[2] where he flew F-4K Phantom jet fighters.[7] In 1979, he was posted to the Directorate of Naval Air Warfare in London.[2] On 20 January 1982, he became the commanding officer of 800 Naval Air Squadron, operating the British Aerospace Sea Harrier and flying from the aircraft carrier Hermes.[8]

In addition to piloting Sea Harriers, Auld was instrumental in making the platform an effective weapon. Honouring his contribution, the Gathering of Eagles Foundation noted:

Auld flew 62 combat missions and downed two Argentine Daggers. Along with air defense of the Task Force, 800 Squadron proved equally adept in bombing and ground attack. Under his leadership, 800 Squadron’s combat performance proved the value of the Sea Harrier and led to new procurement and modernization programs. Following the Falklands campaign, Auld was posted to Antisubmarine Warfare Striking Forces Atlantic as the Staff Aviation Officer. In 1984, he moved to Norway in the Plans and Policy Division of Allied Forces Northern Europe. Returning to the MOD’s Directorate of Naval Air Warfare in 1987, Auld developed policies and tactics to improve the effectiveness of the Sea Harrier.[2]

On the outbreak of the Falklands War 800 Naval Air Squadron, still under the command of Auld, was brought up to its wartime strength of twelve Sea Harrier FRS1s by transferring four aircraft and their crews from the training squadron 899 Naval Air Squadron, with a further three Sea Harriers taken from storage or trials use. The squadron embarked in Hermes whilst she was still alongside in Portsmouth Dockyard.[9]

On 24 May Auld shot down two Grupo 6 Daggers with AIM-9L Sidewinder missiles over Pebble Island.[2][4] including C-419 which was piloted by Capitán Raúl Díaz[3][5][6][12][verification needed] and C-430, north of Pebble Island. Raúl Díaz survived the incident.[6] The Sea Harrier flown by Auld in this engagement, XZ457, is undergoing preservation at the Boscombe Down Aviation Collection at Old Sarum Airfield.[13]

After the Falklands War Auld was posted to Antisubmarine Warfare Striking Forces Atlantic. On 17 January 1984, he was promoted from lieutenant commander to commander.[14] In 1984 he was posted to Allied Forces Northern Europe in Norway. He was posted back to the Directorate of Naval Air Warfare in London in 1987, and continued his involvement in improving Sea Harrier strategy.[2]

For his service in the Falklands War, Auld was awarded the Distinguished Service Cross on 8 October 1982 in recognition of gallant and distinguished service during operations in the South Atlantic. The citation for the award reads:[15]

Lieutenant Commander Auld is the Commanding Officer 800 Naval Air Squadron. From the beginning of operations, he led the Squadron through the Falklands air battle, which was a most intensive period of operations, with gallantry and dedication. On May 1982, he led a daring and successful strike of nine aircraft at low level in the face of heavy anti-aircraft ground fire against Port Stanley airfield. Although his wing-man was hit, all aircraft returned safely. Following this he led many other dangerous low level attacks, facing high risks with great courage. Lieutenant Commander Auld also played a key role in the air defence battle. He flew over 50 operational missions, on occasions up to four operational sorties per day, followed by long periods at night on deck alert. These included many sorties to repel enemy air attacks. In one incident, he attacked four low flying Mirages and, after destroying two with missiles, was engaging a third with guns when it was hit by a missile from his wing-man. Lieutenant Commander Auld demonstrated outstanding qualities of valour and leadership over a most demanding and extended period of operational flying.