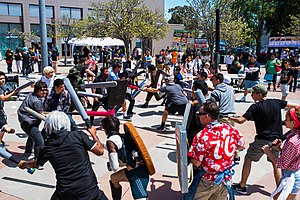 AniFest is an annual one-day anime convention held during spring at the Torrance Cultural Arts Center in Torrance, California.[1] The convention's name is a portmanteau of 'anime' and 'festival'. AniFest was established in 2017 and has attracted more than two thousand guests per year.[2]

Like other conventions, AniFest also has a vendor hall featuring a variety of artists and exhibitors. Attendees can find anime goods such as DVD video, cosplay merchandise, figurines, and other crafts.

Fans of Japanese animation from an online Facebook group organized the one-day festival to be held in Torrance, CA.[6] The organization eventually formed into a 501(c)3 Non-profit charity.[7] AniFest is scheduled to return on March 23rd, 2019 with additional guests and increased indoor floor space.[8]

This article "AniFest" is from Wikipedia. The list of its authors can be seen in its historical and/or the page Edithistory:AniFest. Articles copied from Draft Namespace on Wikipedia could be seen on the Draft Namespace of Wikipedia and not main one.

Retrieved from "https://en.everybodywiki.com/index.php?title=AniFest&oldid=1051595"
Hidden categories:
This page was last edited on 16 October 2020, at 12:54.
This page has been accessed 1,127 times.
Content is available under License CC BY-SA 3.0 unless otherwise noted.
Privacy policy
About EverybodyWiki Bios & Wiki
Disclaimers