Annalyn Miriam Cyrus (born November 1, 1997) is an American child actress. She got her first role as Julie Reeves on Bonne Nuit in 1999.

She began her career in 1999 in the TV Movie Bonne Nuit. At the age of four she appeared as "Kid" in three episodes of the television show Doc. In 2003 she got her first main role as Leah Miller in the thriller Haunted. She succeeded in Dead Flesh (2007) as the role of Sammy. She was a background dancer in the 2009 film Hannah Montana: The Movie and played small roles in four episodes of the Disney Channel Original Series Hannah Montana. In 2009 Annalyn worked among Frank Langella in the family- short movie Christmas Eve: Alaska. She was in the straight-to-DVD movie Mostly Ghostly where she was spotted as a Trick or Treater. Annalyn also appeared in five episodes of the Disney Channel Original Series A.N.T. Farm and Vampires Suck as Team Jacob Girl. Now it is rumored that Annie is starring in new movie The Network as Amanda Varon which is supposed to be out in mid-2014. 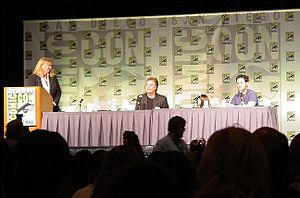 Share
Retrieved from "https://en.everybodywiki.com/index.php?title=Annalyn_Cyrus&oldid=3945"
Categories:
Hidden categories:
This page was last edited on 23 February 2018, at 20:44.
Content is available under License CC BY-SA 3.0 unless otherwise noted.
This page has been accessed 584 times.
Privacy policy
About EverybodyWiki Bios & Wiki
Disclaimers