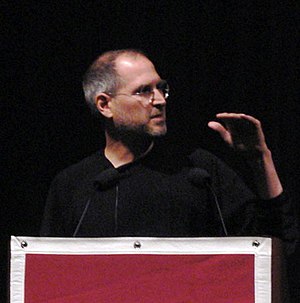 Apple co-founder and CEO Steve Jobs had plans to design and build a car.

This article is about the speculative project from Apple Inc. For the 1910 era car, see Apple (automobile).

Apple iCar is an electric automobile project secretly operated by Apple Inc. The project is code name "Titan". A substantial number of Apple employees are working on this project.[1][2][3]

The Apple iCar project Titan was approved by Tim Cook a year ago and assigned to Vice President Steve Zadesky, a former Ford engineer as project in-charge.[4] For the project Apple also hired Johann Jungwirth, the former-president and chief executive of Mercedes-Benz Research and Development North America, as well as at least one transmission engineer.[5][6][7][8]

Apple co-founder and CEO Steve Jobs had plans to design and build a car according to Apple board member and J. Crew Group CEO Mickey Drexler. Discussions about the concept surfaced around the time that Tesla Motors debuted its first car.[9] Reports indicate that the company has been offering incentives to Tesla employees to join Apple.[10] The Wall Street Journal reports that the product would resemble more of a minivan than a car,[1] and The Sydney Morning Herald says that production could start as soon as 2020.[11]

Retrieved from "https://en.everybodywiki.com/index.php?title=Apple_iCar&oldid=1854244"
Categories:
Hidden categories:
This page was last edited on 7 March 2015, at 12:34.
This page has been accessed 35 times.
Content is available under License CC BY-SA 3.0 unless otherwise noted.
Privacy policy
About EverybodyWiki Bios & Wiki
Disclaimers