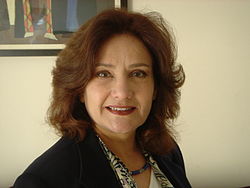 Arabs for Israel (Arabic: عرب من أجل إسرائيل‎) is an organization composed of ethnic Arabs who support Israel and Middle East peace.[1][2] The group was founded in February 2004 by Nonie Darwish, an Egyptian-American Muslim-born Christian.[3] The group believes that “We can support the State of Israel and the Jewish religion and still treasure our Arab and Islamic culture”.[4]

Darwish maintains there are Muslims in America who speak out against terrorism and are pro-Israel, who are shunned by the organized Muslim community and cannot speak in mosques.[1]

When asked why she started Arabs for Israel, she said "to support Israel doesn't mean being anti-Arab. I love my people, but for peace to happen, we need a big leap, a new attitude; forgiveness and compassion." Darwish further said that she is afraid Israel will give away too much territory, making the country too small to defend. She concluded that "My Arab people are beautiful people, and I pray to God that they will find forgiveness in their hearts."[5]

The positions of Arabs For Israel include the acceptance for the existence of the State of Israel, a legitimate state that is not a threat but an asset in the Middle East. The group further states that "Every major World religion has a center of gravity. Islam has Mecca, and Judaism has Jerusalem." The group says it is not "Anti-Islam, Anti-Arab, confrontational or hateful."[citation needed]

Retrieved from "https://en.everybodywiki.com/index.php?title=Arabs_for_Israel&oldid=1248410"
Categories:
Hidden categories:
This page was last edited on 16 January 2021, at 01:54.
This page has been accessed 50 times.
Content is available under License CC BY-SA 3.0 unless otherwise noted.
Privacy policy
About EverybodyWiki Bios & Wiki
Disclaimers
Mobile view