Arun Singhaniya (ca. 1960 - 1 March 2010) was a Nepalese journalist and chairman of the Janakpur Today Communications Group in Janakpur, which is located in the Terai region of Nepal. The case of Singhaniya's murder is only one example out of other various killings involving those working in the media industry that took place in Nepal due to criminal activity or terrorist activity in the country.[1][2][3]

Arun Singhaniya worked as a journalist in Janakpur, Nepal. He is known to have a son by the name of Rahul.[4]

Due to working in the media industry as a journalist, Singhaniya was made a target by those involved in a number of criminal gang activities. He eventually became a victim of homicide, dying from fatal gunshot wounds.[2] 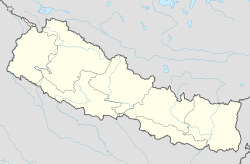 Janakpur
Janakpur, in the Terai region, is located in Nepal and shown relative to the capital Kathmandu.

Singhaniya was on his way home after participating in the celebration of Holi, a Hindu festival, when he became a victim of a shooting on March 1, 2010. After celebrating Holi, Singhaniya was shot around 6 p.m. on March 1, 2010, while going back home. Singhaniya was struck down by three to four bullets shot at close proximity by assailants riding one to two motorcycles. The shooting took place close by his living quarters.[7][8][9]

The groups that took responsibility for his murder were the Terai Janatantrik Mukti Morcha, Terai Janatantrik Party-Madhes, and one other. These organizations are supposed Maoists who claimed that Singhaniya displayed misleading information about them and their Madhes movement. For this reason, they have been stated to admitting to the murder of Arun SInghaniya.[5][7][10][11]

The Home Ministry of Nepal has claimed over a hundred groups occupying the Terai territory have access to weaponry. Over 200 murders took place during 2009-2010 within the Terai, and as a result, citizens in the areas of Nepal and India have pushed for a stronger security system.[12] Police investigations took place well into 2014 where police looked into the bombing of Ramananda Chowk. On March 6, 2014, suspects Mukesh Chaudhary, Ram Binov Yadav, Om Prakash, Sanjaya Sah were reportedly detained as the people behind the bombing which killed over three people as well as the murder of Arun Singhaniya. Since 2013-2014, Govinda Puri and Uttam Raj Subedi, a Police superintendent, have made over 150 arrests of those involved in a number of criminal activity.[13]

The murder case was still unsolved by May 2014. Although suspects have been named, it is believed that they are protected under authority figures who are affiliated with armed groups, even groups that are connected to the case of Singhaniya.[14] Rup Kumar Neupane, a police inspector was unseated from his position due to his connections with criminals.[15][16][17][18][19]

Associations within the Madhesi populace are currently involved in a Maoist revolt against the Nepalese government. Several of these groups also announced that they were the criminals supposedly liable for the case of Jamim Shah and others who were working in the media industry.

The death of Arun Singhaniya has added onto the fear already existent in the media industry due to previous assassinations that had taken place in India and Nepal. Before the murder of Arun Singhaniya, two others were killed in the country of Nepal who also worked in the media industry. Jamim Shah, who was a 42 year old presiding officer of a media company, was shot to death in the capital of Nepal on February 8, 2010.[8][20][21]

Uma Singh worked for Radio Today and Janakpur Today Communications Group, which were owned by Arun Singhaniya. In January 2009, Singh was killed through stabbing.[20][22]

After the collective deaths of those working in the media industry during that time, Nepal's government claimed that they would strengthen the security within the country. This claim was tested after there was an attempted shooting made towards Nagender Pampaty in Lazimpat around 6 P.M. on March 3, 2010 by gunmen on a motorcycle. Police reports say that Pampaty managed to leave the scene unharmed. Tensions between Nepalese citizens and their government grew as the killings seemed to increase.[23][24]

This issue did not improve as of 2012, more crimes were committed Nepal towards media workers. In early April 2012, Yadav Poudel, from Rajhdani Daily, was executed along with two others at different time periods in the same year. Organizations armed with weaponry and the government made threats towards the media who made efforts to access information on the state's misuse of power or financial complications. More threats, assaults, and assassinations took place in order to keep journalists from reporting on and exposing criminal activity. More than 10 other journalists around the time of Singhaniya's death became victim to hostile messages.[25] Freedom of the press became an issue due to the Nepalese government wanting to put restraints on the media industry.[26] Bands equipped with weapons operating within the Terai territory have joined the list of Predators of Press Freedom.[27]

Irina Bokova, Director - General of UNESCO, made a statement regarding the murder case of Singhaniya stating, "I condemn the murder of Arun Singhaniya, who was fulfilling an important role in the development of a dynamic information service."[28][29]

In response to Singhaniya's assassination, the Chamber of Commerce and Industry of Janakpur, Federation of Nepalese Journalists, and other media broadcasting companies protested and condemned the murder. Those protesting Singhaniya's death said they were disturbed by it and urged for quick investigation and incarceration of the assailants who murdered him. They also made statements regarding Nepal's government and their supposed unwillingness to protect journalists.[3][10][30][31]

According to Upendra Yadav, chairman of Madhesi Jana Adhikar Forum, Nepal, "the state has showed no interest in arresting them."[32] Shankar Pokhrel claimed that "extra activities," were one of the reasons why those in the media industry were being attacked. He also stated that there would be a decreased number of crimes made against those in the media industry if they were to only involve themselves with "media related activities."Threats were made to close down businesses, corporations, and companies if the Nepalese government did not follow through with making amends to the country's security system.[33] The Office of the United Nations High Commissioner for Human Rights located in Nepal have had to step in to request for better protection in the media industry. Due to increasing unrest within the country over issues concerning security, Rizvan Ansari, the Minister of State for Home Affairs of Nepal, was unseated from his position.[24][32][34]

Share
Retrieved from "https://en.everybodywiki.com/index.php?title=Arun_Singhaniya&oldid=859668"
Categories:
Hidden categories:
This page was last edited on 17 July 2020, at 09:13.
Content is available under License CC BY-SA 3.0 unless otherwise noted.
This page has been accessed 561 times.
Privacy policy
About EverybodyWiki Bios & Wiki
Disclaimers