The Asbury Park Music Awards is an annual award ceremony that is held in Asbury Park, New Jersey, United States, which recognizes musicians for their work.

Asbury Park's musical history includes a strong blues tradition and the Jersey Shore sound. Artists associated with the town include Bruce Springsteen, Southside Johnny and the Asbury Jukes, Bon Jovi, and many others. To recognize musicians and others associated with the local and regional music scene, Scott Stamper,[1][2] founder of the Wave Gathering Music Festival,[3] and Pete Mantas founded the annual Asbury Park Music Awards (also called the Asbury Music Awards) in 1993. The awards were originally titled the Golden T-Bird Awards. 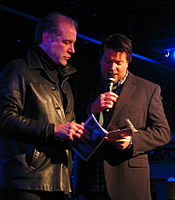 They held the first award ceremony in 1993, at a small club on Main Street in Asbury Park called the T-Bird Cafe, owned by Stamper. The awards ceremony later moved to The Saint, and in 1995 the organizers renamed it the Asbury Park Music Awards. Attendance quickly exceeded The Saint's capacity, and the ceremony began to rotated among larger venues, including The Fastlane and The Tradewinds.[4] In recent years, the ceremony has been held at The Stone Pony.[5]

The awards ceremony follows a format similar to the Grammy Awards,[1][6] interspersing award presentations with live performances of original music and poetry.

Share
Retrieved from "https://en.everybodywiki.com/index.php?title=Asbury_Park_Music_Awards&oldid=478854"
Categories:
Hidden category:
This page was last edited on 14 June 2019, at 10:55.
Content is available under License CC BY-SA 3.0 unless otherwise noted.
This page has been accessed 336 times.
Privacy policy
About EverybodyWiki Bios & Wiki
Disclaimers