Invincible returns to the Solent after the Falklands War

A thwarted attack on HMS Invincible was conducted by Argentine Naval Aviation in late May 1982, within the last two weeks of the Falklands War (Spanish: Guerra de las Malvinas). Although HMS Invincible returned home unharmed in September 1988, the Argentine Air Force continues to claim that their missile hit the carrier and two A-4 hit the carrier with four 500 lb bombs.

The Argentines had one operational Exocet missile left.[citation needed] On 28 May 1982 the Argentine Navy decided to attack HMS Invincible, with the Exocet missile, to be delivered by Navy aircraft.[1] 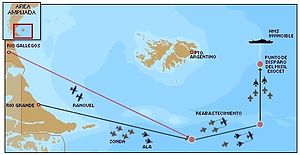 On 30 May, two Super Étendards, one carrying Argentina's last remaining air-launched Exocet, escorted by four A-4C Skyhawks each with two 500 lb (230 kg) bombs, took off to attack Invincible.[2] Argentine intelligence had sought to determine the position of the carriers from analysis of aircraft flight routes from the task force to the islands.[2] However, the British had a standing order that all aircraft should conduct a low level transit when leaving or returning to the carriers to disguise their position.[3] This tactic compromised the Argentine attack, which focused on a group of escorts 40 miles south of the main body of ships.[4] Two of the attacking Skyhawks were shot down by Sea Darts fired by HMS Exeter,[2][4][5][self-published source?] with HMS Avenger claiming to have shot down the missile with her 4.5" gun (although this claim is disputed).[6] No damage was caused to any British vessels.[2] During the war Argentina claimed to have damaged the ship, although no evidence of any such damage has been produced or uncovered.[7][self-published source?]

On Monday 31 May 1982, several Argentine newspapers claimed that Invincible had been hit. The conflicting claims were due to incomplete or misinformation, attributable to the fog of war. The attack was duly noted in log books by the British, and a report was sent to the Cabinet, even though the whys, hows and wherefores were muddled. The fleet's commander said they were taken "completely by surprise." He continued:

Invincible returned to Britain without damage, disproving the Argentine claim of a successful attack.[8] Notwithstanding this, there are still false claims in Argentine sources that Invincible was seriously damaged or even sunk.[9][10][11][12][13]

The results of the attack were further confused by a deliberate propaganda misinformation campaign by the Argentine junta, including fabricated pictures of the Invincible and other ships in flames. In fact, this has been the source of continuing and wrong-headed conspiracy theories, going so far as to implausibly theorise that the UK built a replacement carrier to hide their loss. Compounding the confusion, the Royal Navy responded first with an inaccurate explanation — that the attack was on the hulk of the Atlantic Conveyor, which in fact had already sunk — and then with an entirely different scenario three days later.[citation needed]

Retrieved from "https://en.everybodywiki.com/index.php?title=Attack_on_HMS_Invincible&oldid=1663024"
Categories:
Hidden categories:
This page was last edited on 30 April 2021, at 16:14.
This page has been accessed 246 times.
Content is available under License CC BY-SA 3.0 unless otherwise noted.
Privacy policy
About EverybodyWiki Bios & Wiki
Disclaimers