Augustus John Smith (15 September 1804 – 31 July 1872) was Lord Proprietor of the Isles of Scilly for over thirty years, and was largely responsible for the economy of the islands as it is today.

Smith was born in 1804 "at the house of a fashionable accoucheur in Harley Street", London[1] before returning to the family home of Ashlyns Hall in Berkhamsted, Hertfordshire, England. He became known locally as a philanthropist, doing his best to improve educational standards in his home district, opening several non-denominational schools with his own money. In 1834 he acquired the lease on the Isles of Scilly from the Duchy of Cornwall for £20,000, and set about changing the islanders' way of life, expelling those who could not find a job locally and reforming the long-neglected leaseholds of the smaller islands, where systematic sub-letting and underinvestment had left the population in a state where subsistence was the best that could be hoped for, and famine a constant threat.

In 1861, Augustus Smith Esq, MP published A True and Faithful History of the Family of Smith, Originally Cradled at Wiverton and Cropwell-Butler, in the Parish of Titheby, and more recently established at Nottingham, in the County of Nottingham. As the title suggests, it traces the family name from its early beginnings and purports ″the county of Nottingham may justly be considered as the fatherland of Smiths, who have always abounded within its borders″.[2]

In 1866 Lord Brownlow tried to enclose Berkhamsted Common with 5' steel fences built by Woods of Berkhamsted and therefore, claim it as part of his estate. Augustus Smith MP brought out a gang of navvies on a specially chartered train to roll up the fence and leave it within sight of Brownlow's house, demonstrating his will to protect Berkhamsted Common for the people of Berkhamsted. This and his actions in promoting working class education are commemorated by the award of the Augustus Smith scholarship for state school students in Berkhamsted.

In 1834, Augustus Smith acquired the lease on the Isles of Scilly from the Duchy of Cornwall for £20,000, created the quasi-aristocratic title Lord Proprietor for himself, and set about changing the islanders' way of life. Besides building a new quay at Hugh Town on St. Mary's, he sowed gorse and trees to provide shelter for the agricultural land. He built schools on the five principal islands, and instituted compulsory education some thirty years before it became the rule on the mainland. Some of his actions were unpopular; in 1855, he moved the ten impoverished inhabitants of the island of Samson to more salubrious quarters and turned the island into a deer park (the deer did not like the habitat, and escaped.) The merit of his reforms is demonstrated by the fact that most of the male alumni of his schools who went to sea ended their career behind the mast, and very few of the female alumni went into service.

Smith lived at Tresco Abbey and developed the gardens on Tresco. He never married, but is believed to have had illegitimate children by several of his female servants. He had a close relationship and a lifelong correspondence with Lady Sophia Tower, a married woman (and only daughter of the 1st Earl Brownlow) who often visited him at Tresco. The estate was inherited by his nephew Thomas Algernon Smith-Dorrien-Smith, and his descendants retain the lease of Tresco to the present day. 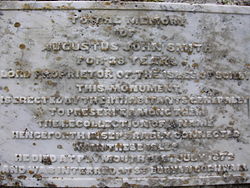 The plaque on the front of a monument to Smith, located in the churchyard of St Mary's Old Church, St Mary's, Isles of Scilly. Click to enlarge.

He was Liberal Member of Parliament (MP) for Truro from 1857 to 1865. He served as President of the Royal Geological Society of Cornwall from 1857–1862,[3] and also of the Royal Institution of Cornwall.[4]

Smith died of gangrene of the lungs in Plymouth on 31 July 1872. He was laid to rest in St Buryan's Church, St Buryan, Cornwall. A tall stone monument was erected in the churchyard of St Mary's Old Church, St Mary's, Isles of Scilly to recognise Smith's involvement with the Islands.

Retrieved from "https://en.everybodywiki.com/index.php?title=Augustus_Smith_(actor)&oldid=742189"
Categories:
Hidden category:
This page was last edited on 27 May 2020, at 09:58.
This page has been accessed 116 times.
Content is available under License CC BY-SA 3.0 unless otherwise noted.
Privacy policy
About EverybodyWiki Bios & Wiki
Disclaimers
Mobile view