The following is a table showing average attendances for Football clubs in La Liga. The specific seasons are listed alongside each team, with the default being the 2013–14 season.

Camp Nou, home of Barcelona, has the highest average attendance in La Liga. 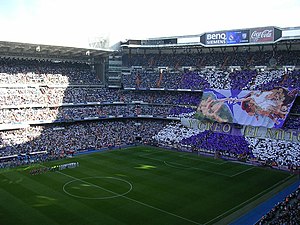 Estadio Mestalla, home of Valencia CF, had the fourth highest attendance in La Liga in 2012-13 season.

This article "Average attendances of La Liga clubs" is from Wikipedia. The list of its authors can be seen in its historical. Articles copied from Draft Namespace on Wikipedia could be seen on the Draft Namespace of Wikipedia and not main one.

Retrieved from "https://en.everybodywiki.com/index.php?title=Average_attendances_of_La_Liga_clubs&oldid=1913829"
Categories:
Hidden category:
This page was last edited on 22 March 2015, at 18:35.
This page has been accessed 42 times.
Content is available under License CC BY-SA 3.0 unless otherwise noted.
Privacy policy
About EverybodyWiki Bios & Wiki
Disclaimers